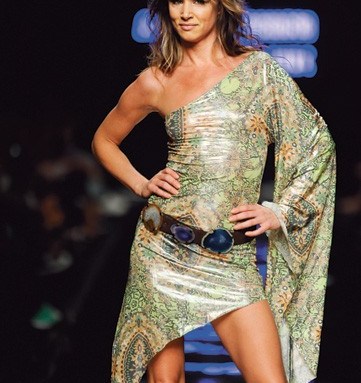 FINGER-LICKING GOOD: Juliette Lewis proved she was a natural-born killer, but this time on the Milan runways. The actress and lead singer of Juliette and the Licks made her Milanese catwalk debut Saturday for Italian label Miss Bikini Luxe. The show opened with her new single “Hot Kiss.” The multitasker was taking a time out from filming “Whip It!” directed by Drew Barrymore, she’s also working on her third album, which is due out in 2009. After the show, Lewis headed to Lotus nightclub for tipples and tunes with a gaggle of gal pals.

DESIGNER BABY: After fronting Dolce & Gabbana’s advertising campaign for the fragrance The One for Men earlier this year, Matthew McConaughey is set to attend the designer duo’s women’s show on Thursday, and is rumored to be traveling to Milan with an entourage that includes girlfriend Camila Alves, their two-month-old son Levi, and a bevy of nannies.

BOOGIE NIGHTS: R&B diva Solange Knowles, Beyoncé’s younger sister and the face of Armani Jeans, headlined the front row at Emporio Armani Sunday. “Sometimes you see artists attached to designers that are not a good fit, but I’m blessed,” said Knowles, whose track ‘Sandcastle Disco’ played after the show. Knowles will also attend the Giorgio Armani show and the designer’s store opening on Monday ahead of kicking off her European tour mid-October with Alicia Keys.

Earlier, Armani feted the latest fruit of his exclusive collaboration with electronics giant Samsung with the Emporio Armani Samsung “Night Effect” cell phone. “Those who love Emporio Armani also often love nightlife. They like going out in the city, after dark, when the bright lights of a modern metropolis illuminate the streets,” Armani said in a statement. “For this young, cool and social crowd, the Night Effect mobile is the perfect accessory.” The Night Effect features an Mp3 music player and LED lighting on the sides, which illuminates in red, green or blue every time the user is called or makes a call. It is expected to retail for 300 euros, or around $430, and will hit the high street in Europe in November and in the U.S., the Middle East and Asia before yearend.

SHOE BOP: Calling all Mademoiselle Imelda Marcos-es: See By Chloé has launched a shoe line for spring, freshly on the heels of its foray into bags. The color-soaked line includes perforated leather platforms with ankle straps, hippy sandals and a range of jelly shoes featuring the brand’s name carved into its soles. The collection retails from about $120 to $500.

BIG FOOT: A giant pair of plastic shoes greeted guests at a party Thursday night in London to fete the collaboration between architect Zaha Hadid and the eco-friendly Brazilian shoe brand Melissa. “They’re so modern aren’t they? And the way that they don’t match, it’s just genius,” said designer Judy Blame, referring to the slightly mismatched plastic shoes. Guests, including Mark Ronson, Roisin Murphy, Pam Hogg and Jefferson Hack, gathered at the Wapping Project, a former hydraulic power station, for the launch.

A NEW DIESEL ENGINE: The seats aren’t covered in denim cloth for safety reasons, but the new Fiat 500 by Diesel reflects the brand’s edgy style. Embellished by rivets and stud details on the bodywork, Diesel’s iconic Indian head stands out on the hubcaps and on the gearshift. The brand’s jeans pocket is reproduced on a seat as an iPod case, and its stitching adorns the interiors. The car, which retails between 15,000 and 17,000 euros, or $21,700 and $24,600 at current exchange, was unveiled on Sunday by Diesel chief Renzo Rosso together with Lapo Elkann, whose advertising agency will be in charge of the ad campaign for the car. The limited edition Fiat 500 by Diesel, of which only 10,000 are being produced, will be presented at Paris’ international car show next month and be available in November. The car comes in military green, bronze or black. “People want to identify with a brand, follow a dream,” said Rosso of his decision to venture into car design. “This is a car for dreamers, more than for drivers,” concurred Lorenzo Sistino, chief executive officer of Fiat Auto. Rosso said he was so taken by the project that others are in the works with Fiat.

MOUSE MODE: Those feeling the credit crunch might want to invest in rodent-size designs by their favorite brands. Feting the 80th anniversary of Minnie Mouse, 80 fashion houses — including Christian Lacroix, Chanel, Azzaro and Vanessa Bruno — whipped up outfits for limited edition versions of the girly Disney character, made in Japan, to be sold at a charity auction on Oct. 20 at Christie’s in Paris.

HIRST NO. 501: Damien Hirst’s blockbuster auction of works at Sotheby’s last week thrilled the folks at Levi’s, for whom Hirst has painted seven pairs of 501s. “It was completely unplanned. We knew he was going to auction off his art work, but we didn’t know when,” said You Nguyen, senior vice president of Levi’s product, merchandising, design and licensing at a party where three of the designs were displayed at the Ecole des Beaux Arts in Paris Thursday night. The buzz around the $200 million sale, plus the British artist’s rece nt declaration that he will no longer use his distinctive spinning technique (where he pours paint on canvases as they spin around) as featured on the jeans, will likely send prices rocketing. Three pairs will go on sale in Europe next month. At 10 Corso Como and at Colette, where they’ll be displayed during the contemporary art fair FIAC, they’ll likely start at 18,000 euros, or $26,000 at current exchange, while at Dover Street Market they’ll be sold, Hirst-style, at auction. “In the office, we were saying ‘How much do you have? Shall we pool together and then wait a few years?’” said Nguyen.

PARIS MANIA HITS MILAN: Paris Hilton almost caused a riot in downtown Milan Friday night at the Italian launch of her eponymous girly sportswear label. Crowds of sweaty teenagers went elbow to elbow for a glimpse of Hilton outside the Coin department store, which has exclusive rights to distribute the Paris Hilton Clothing line in Italy. Safely inside, she said simply, “It’s hot,” apparently referring to her collection rather than the weather. Coin managing director Francesco Sama certainly thought so, saying the line was “ a gift to customers”. Coin’s Paris circus included pink and white decorations, window displays featuring her clothes, and fuchsia carpets with her name embossed in gold. A suite of Paris look-a-likes complete with little dogs also attended in the event, while her songs littered the airwaves. “She’s a real myth,” explained one wannabe. “I would do anything to be like her.”

YES SHE CAN: Although designer Eileen Fisher admits she’s not the most experienced of public speakers, she took motivation from presidential candidate Barack Obama when she agreed to deliver the keynote address at the 22nd annual Entrepreneurial Woman’s Conference in Chicago earlier this month. “The way Barack Obama speaks is so inspiring,” said Fisher, who referenced Obama in her speech. “It made me interested in developing my speaking ability.” Fisher took on no small assignment. She presented before an estimated crowd of 2,300 people at the event, which in the past boasted Martha Stewart and Oprah Winfrey as keynote speakers.

TAKING A BOW: London’s Savile Row may be thoroughly British, but it now has a French accent, too. Lanvin launched its men’s store on the famous street, a sleek unit offering men’s wear, a semi-bespoke service and, of course, a range of trademark bow ties. “Look, mine even has my initials,” said Alber Elbaz, pulling a bright pink silk bow tie from his neck to reveal the embroidered letters. Elbaz was on hand with Lanvin’s men’s designer Lucas Ossendrijver and guests including singer Mika, Ozwald Boateng, and Simon and Yasmin Le Bon to fete the occasion. So why Savile Row? “It’s mythic,” said Elbaz. “For me in London, there was no other place.”

FIBER FORCE: Actress Bijou Phillips last week joined Dow XLA to fete a line of denim fabrics incorporating the XLA fiber at Manhattan’s High Bar. The actress is in town for the premiere Wednesday of her new film “Perhaps Choke,” directed by Clark Gregg. “In New York my schedule is more relaxed,” Phillips said, “but in L.A. it’s nice to have jeans that can be relaxed and distressed for horse riding and hold a hot shape for the night.” Among the companies using XLA blended denims today are Seven For All Mankind, Prada and AG Jeans. “I love that the distressed look is coming back in denim,” said designer Adriano Goldschmied, “This fiber allows us to use innovative washes on denims without sacrificing design.”

ARTY PARTY: Who said the art and fashion crowds don’t mesh? On Nov. 18, Milk Gallery will be the venue for RxArt’s “The Party,” the annual fund-raiser formerly called the RxArt Ball. This year, the ball honors Jeff Koons, with Stephanie Seymour and Peter Brant as well as Proenza Schouler’s Jack McCollough and Lazaro Hernandez as the night’s fashionable co-chairs.

Guests will be in for a treat — they will receive a limited edition puzzle by artist Dan Colen.

OVER-KAST: While the British have been mourning a summer of rainstorms and floods, the unpredictable weather does have one fan. “I love it, it suits my mood,” enthused OutKast’s André 3000, whose real name is André Benjamin. “You never know what you’re going to get.” Benjamin was in London last week to fete the launch of new men’s wear line Benjamin Bixby at Harrods, with guests including Estelle, Alexa Chung, Coco Sumner, Jimmy Choo, Olivia Inge, Yasmin and Simon Mills, Noelle Reno, Daisy de Villeneuve and model David Gandy.

SECRET BAG: Former Elle fashion director Marin Hopper has been quietly at work on a bag collection called Hayward Luxury. The brand, which features bags made from exotic skins with hardware designed by Phillip Crangi, are named for her famous Hollywood agent grandfather, Leland Hayward, and meant to evoke the glamour of Tinseltown’s heyday. So far she has only sold them privately to clients in L.A., but plans to launch for wholesale in early 2009. Hopper is the daughter of actor Dennis Hopper.