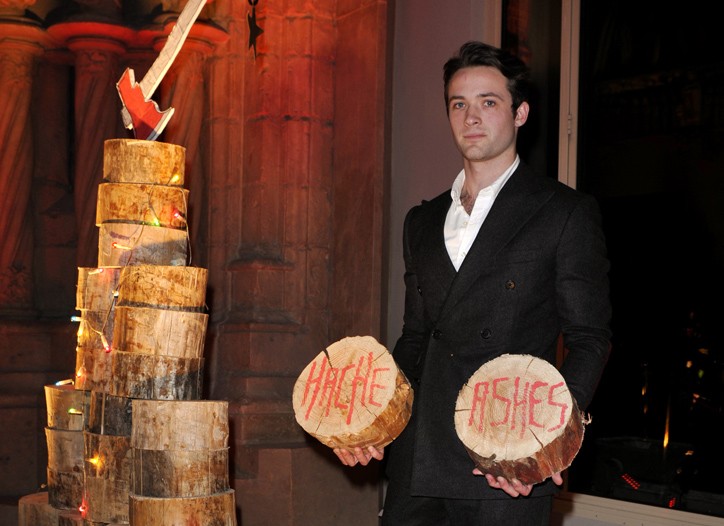 FAMILY TREE: Designers gathered at the Cité de l’Architecture museum in Paris Tuesday night for an annual charity auction of designer Christmas trees. Louis-Marie de Castelbajac made his from a pyramid of logs, with an ax at the top instead of a traditional angel or star. “It’s so great that we are both participating,” said his father, designer Jean-Charles de Castelbajac, whose next act will be dressing Selfridges in London. “I have been given carte blanche to decorate the windows between May, June and July,” said the designer, who plans to spend the holidays at his 11th-century home in the Pyrenees.

“It’s been quite a year,” sighed Nathalie Rykiel, whose first book is out Jan. 19 with a French title that translates roughly to “You Will Be a Woman, My Daughter.”

Meanwhile, Sixties screen star Mireille Darc was present raising awareness over the plight of children. “I am a patron for the Chain of Hope,” said Darc, adding her next project would be a survey on children who are taken in by social services. “You know, it’s nice for children to believe in Father Christmas,” she chimed.

ROLLING STONES: “In case I needed to remind you all, this is Bulgari,” said Christie’s senior vice president and jewelry department head Rahul Kadakia, encouraging bidders during an auction Tuesday night. The evening was a culmination of a yearlong celebration of Bulgari’s 125th anniversary, for which it donated $4 million worth of jewelry and watches to be sold to benefit Save the Children’s Rewrite the Future campaign. The company additionally donated one million euros, or $1.5 million, to the organization at the start of this year. While Tuesday’s sale raised $500,000 less than executives anticipated — garnering $1.5 million for a total of 18 rare pieces of jewelry and watches — the mood was still jovial. Ricky Martin, Morgan Fairchild, Jessica Lange and Rose Byrne came to observe the sale, but Ben Stiller, who partook in a Bulgari-sponsored trip for Save the Children, was unable to attend. Nevertheless, he managed to interrupt the proceedings with a parody video in which he urged the audience to support his fake charity, Stiller Strong, by buying a sweatband for a mere $300 million. “It’s been signed three times by me,” he said. “It’s elastic-y and it wicks away sweat. Now, auctioneer, go ahead and get it going.” Stiller then offered to throw in a sweatshirt he and actor Jim Carrey wore while shooting Stiller’s box-office flop, “The Cable Guy.” “We never washed it,” he said.

HOUSEWARMING: Comme des Garçons has moved shop in Hong Kong — opening a 4,400-square-foot underground space on Ice House Street in Central. The store, which is entered on street level, showcases all of the Comme des Garçons collections and has a space devoted to art exhibitions. It opened to the public on Monday after CDG’s Rei Kawakubo and company managing director Adrian Joffe hosted a cocktail reception over the weekend. Chinese artist and human rights activist Ai Weiwei’s porcelain watermelon sculptures occupied the art space for the occasion.

BUSY BAUMER: The inscription on Lorenz Bäumer’s watch reads, “Each one is the artisan of his destiny,” which the jeweler takes quite seriously. “You have to make the most of life every day,” declared Bäumer, who hosted a dinner last week at the London West Hollywood hotel attended by Brooke Davenport, Cameron Silver and Michel and Sally Perrin. He certainly has been lately. In the last several months, his first high jewelry collection for Louis Vuitton was unveiled, the Rouge G de Guerlain lipstick he designed hit stores and he was elected to the luxury association Comité Colbert. And Bäumer isn’t slowing down. He’s redecorating his Paris offices, has his third child in less than five years on the way and is teaming up with Guerlain again to add his touch to possibly mascara and perfume. “I’m very busy,” sighed Bäumer, making the understatement of the day.