Designer Tillman Grawe made quite an entrance with his head, face and neck covered in Swarovski crystals. 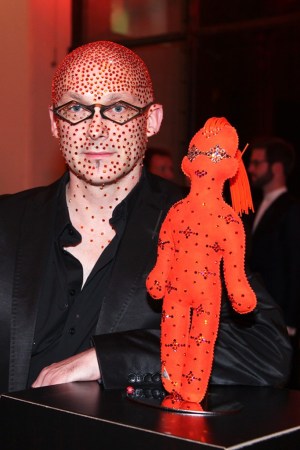 HELLO DOLLY: Very well-dressed designer dolls were the guests of honor at a cocktail on Monday night at the Petit Palais in Paris. Les Frimousses (or little faces, in English) for UNICEF were unveiled in a preview for a benefit auction for the charity to be held on Dec. 13.

“It was such fun meeting all the designers and seeing their different inspirations for the dolls,” said a Dior clad Anna Sherbinina, who as a UNICEF ambassador worked with French TV channel Paris Premiere to direct her first film about the making of the designer dolls. The actress said organizers are hoping to tap French director Cédric Klaplisch to direct the next film for the Frimousses project. “It would be such a good mix with his romantic and poetic vision,” she reasoned.

Designer Tillman Grawe made quite an entrance with his head, face and neck covered in Swarovski crystals. “It took over four hours to do, I think there are around 1,000 crystals,” said Grawe. Lingerie designer Chantal Thomass said she had just launched her book “Chantal Thomass Carnet d’Adresses,” with publishing house Editions du Chêne. She also decorated two opera-inspired suites at the Hotel Pradey in Paris.