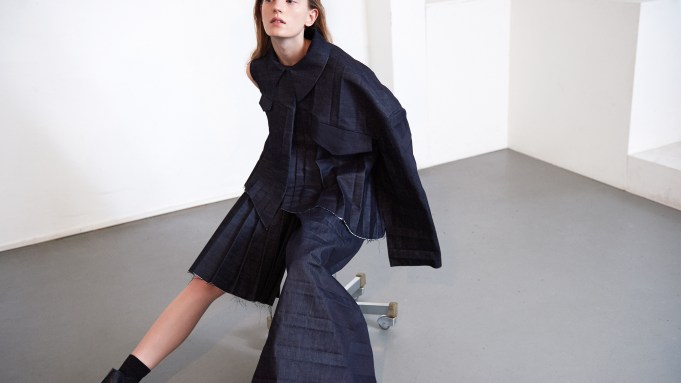 SUPPORT NETWORK: The Fédération de la Haute Couture et de la Mode’s Designers Apartment initiative is getting a burst of new energy this season with a change of venue to the Palais de Tokyo, intended to highlight the industry body’s role as an incubator for young design talent, offering them year-round support and training as well as an all-important showroom during Paris Fashion Week.

Alum of the initiative include Y/Project and Victoria/Tomas, who are both now included on the official show calendar.

“This new space shows a new energy,” said Designers Apartment project manager and brand coach Patricia Lerat. “It’s interesting for the brands to be in a contemporary art space, several of them are artists, so that goes well with the place.”

She continued, “Each of them is very different, and that’s important. We need singular designers with strong identities. But they also benefit from our help on the commercial side.”

The new space, on the top floor of the modern art museum, which plays a central role in Paris Fashion Week each season as the setting for many a show, allows the 13 labels to present a bigger area to show off their creations. Several also staged their presentations within the space.

These included the first full-scale presentation Tuesday for Dawei Sun’s Dawei collection, now in its fourth season, allowing the designer to show the full scope of his collection, inspired by romanticism.

Eliane Heutschi, the designer behind Savoar Fer, is growing her collection’s scope for fall, introducing her first true ready-to-wear pieces, built around box pleats. Heutschi concentrates on a single artisanal technique each season and builds her collection around it.

“Last time, everything was done by hand, I was only selling directly and through pop-ups,” she explained. “Now I have found a supplier who can work by hand or on machines,” she continued, a move she hopes will allow her fledgling business, now in its third season, to grow.

Quoï Alexander continues to craft his creations without recourse to sewing, using alternative techniques like rivets and lacing as well as fusing and bonding to pull them together.

Alexander’s core business is in accessories, selling his handbags directly online. He also consults with textile makers and brands — he recently worked on textile design for Chanel, for example, and has also collaborated with Lenzing. This and his bag designs helping to finance his experimental fashion, which this season featured chain mail-like leggings and perforated leather woven with laces to create an embroidery-like effect.

Newcomer Clara Daguin, a finalist for the 2016 Hyères Prize, focuses on the way we interact with technology and translates that into her designs. It was her first commercial ready-to-wear collection, and rather than incorporating tech into her clothing as she has in previous creations, she used it as her inspiration.

The result was an appealing mix of streetwear references and tech fabrics with embroidery that gave them a romantic mood, with standouts including a long embroidered dress with bell sleeves and embroideries, and a deep red velvet bomber jacket with reflective piping. Retail prices for her line range from 300 euros to 2,500 euros.

Arthur Avellano, who presented during men’s fashion week in January, was another newcomer to Designers Apartment with his unisex collection built around latex. With a color palette taking in an array of burgundy, pink and khaki, he complemented the futuristic material with woven pieces in an Italian check fabric.

With stockists including H. Lorenzo and Opening Ceremony in the U.S., Avellano’s prices range from $800 to $1,800 at retail.

Also new this season, GNDR is another label with a nonbinary focus. For their second collection, Paris-based duo Louis Bastelica and Victor Russo referenced German seamstress Agnès Richter, who was confined in a psychiatric hospital by her family in the late 19th century, where she sewed her poetry onto her straightjacket.

As such, elements of the straightjacket found their way into the monochrome collection through their fastenings, while the poetry formed a graphic motif. Retail prices for the collection, made from Japanese, Italian and French fabrics, range from 100 euros for a t-shirt to 1,500 euros for a coat.