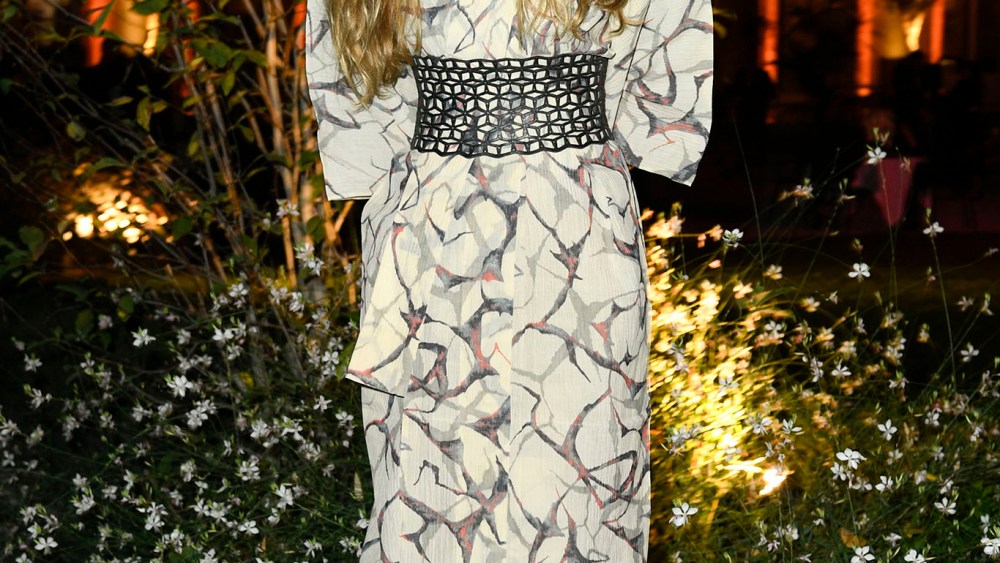 GARDEN PARTY: The garden at Apicius, the Michelin-starred restaurant in a former hôtel particulier near the Champs Elysées, was the scene of an intimate cocktail party organized by ANDAM on Wednesday night.

Nathalie Dufour, founder of the fashion prize, was happy to catch up with this year’s ANDAM Grand Prix winner Antonin Tron of Atlein. Stephanie D’Heygere, winner of the ANDAM Accessories Prize, was proudly modeling her creations, a pair of deconstructed gold hoops worn horizontally across the earlobe, while her friend was sporting a D’Heygere belt with a built-in metro ticket holder.

ANDAM is gearing up for the celebration of its 30th anniversary, which will take place next summer. “Martin Margiela won the first ANDAM Prize in 1989. Time flies,” said Dufour. The celebrations will be organized at Galeries Lafayette in partnership with Guillaume Houzé, director of image of Galeries Lafayette group, who succeeded Pierre Bergé as president of ANDAM.

Another talent spotter was beaming with pride that night. Jean-Pierre Blanc, director of the Festival d’Hyères, is still reeling from the news that Hyères 2018 winners Rushemy Botter and Lisi Herrebrugh are taking over creative direction of Nina Ricci. “It was this summer’s mega surprise,” said Blanc, who added that he heard the news the day after President Emmanuel Macron visited the Villa Noailles, the Art Deco villa where the festival is held. “A spectacular double whammy!” Submissions for the next edition of the Festival d’Hyères open on Monday.

Designers Stéphane Ashpool of Pigalle and Bastien Laurent of AVOC, both previous ANDAM Prize recipients, were spotted chatting in the crowd, alongside Alexandre Mattiussi of AMI. The brand has just reopened two of its Paris stores after refurbishment, and is looking forward to putting out the next “L’homme pour la femme” women’s wear collection.

“I didn’t see myself diving into women’s wear, because it really intimidates me,” said Mattiussi. “So we changed the fit on our men’s collection, but kept the masculine feel.” The designer confirmed that “L’homme pour la femme” will be continued over coming seasons.

Iris van Herpen was taking a break from digging into her brand’s archives for her next book. It will be the biggest one to date, an extensive look at the designer’s history edited by Phaidon. “Looking back into my design process helps me creatively, but can also be quite confusing,” said van Herpen. “You see how quickly time goes and how much more is left to do.”

Johanna Senyk’s silver Wanda Nylon dress was gleaming in the candlelight. The designer has just launched Françoise, a new label focusing on luxury ready-to-wear and accessories made by Italian artisans.

But Wanda Nylon is far from being over. “I’ve put the brand on standby for the moment, but I’m thinking about taking it toward more of a sportswear direction,” said Senyk. “It would be a bit less couture, allowing me to experiment with things on a much bigger scale. I’m just looking for the right partners.”