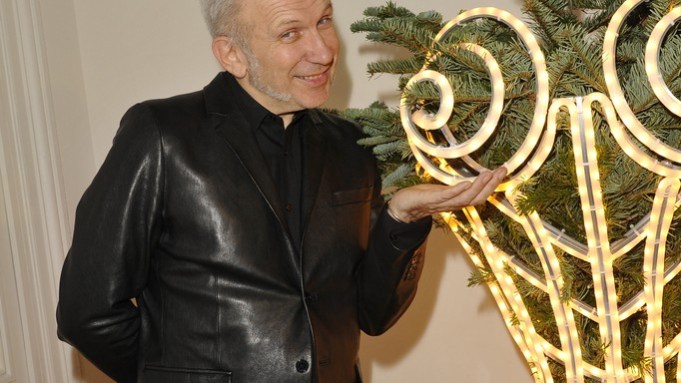 JINGLE BELLS: Fashion journalist Marie-Christiane Marek on Tuesday night unveiled the designer Christmas trees that will be auctioned off for charity on Dec. 9 at Paris’ Hôtel Salomon de Rothschild. For the 18th annual event, an eclectic cast of designers and brands such as Jean Paul Gaultier, Christian Dior and Kenzo Takada put their touches on the 40 sparkling creations. First-timers included Yiqing Yin, Zahia Dehar and French chef Yannick Alléno.

“I was hesitating between the ‘corset’ tree and the ‘marinière’ one,” said Gaultier. “I think I’ll do the marinière next year. With the one, you can change the tree, and reuse the corset.” Before his relaxing holiday in Saint-Jean-de-Luz in the south of France, he is looking forward to his weekend in London. “I’ll go to the theater and eat pudding with butterscotch,” he enthused. The exhibit “The Fashion World of Jean Paul Gaultier,” currently on display at the Brooklyn Museum, is to travel to the Barbican in London in April, before moving on to Melbourne and Paris.

“I wanted to make a convertible tree. It comes with its protective cover,” said Pascale Mussard, who designs Hermès’ Petit h line made from scrap luxury materials. “It can easily be shipped to the family member who cannot come back home for the holidays. For instance, my son isn’t coming this year as he is in Brazil.” Petit h has two exhibitions on tap, one in May at the South Coast Plaza mall, Orange County and one in Taiwan in the fall.

Although she created a tree that looks like a sexy woman, Chantal Thomass sticks to a traditional tree at home. “My grandchildren want to play with the ornaments,” she said. The designer was chosen by Diet Coke France to design a special can for Valentine’s Day.

The Christmas trees will remain on display until Sunday. Last year, they raised more than 69,000 euros, or $93,580 at current exchange, for cancer research.