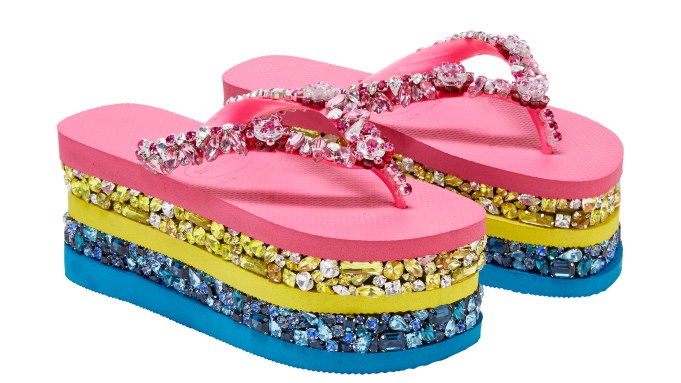 SHOE HEAVEN: After selling loved items from their wardrobes in a London car boot sale earlier this month, the city’s designers have come together to support the charity Women for Women International once again.

A host of names — ranging from designers Nicholas Kirkwood, Charlotte Olympia, Manolo Blahnik, Mary Katrantzou and Simone Rocha to the model Arizona Muse and milliner Stephen Jones — teamed with Havaianas and Women for Women to customize pairs of flip-flops from the Brazilian brand. The one-off pieces will be displayed at Somerset House and auctioned on July 1 to raise funds for the charity.

Having been given carte blanche, designers went all-out with their interpretations of the Havaianas they were given. Rocha added her signature pearl details all over a classic black pair, Jones used a Swarovski-embellished pair to create a headpiece and Charlotte Dellal elevated her pair with a gold platform and gold spiderwebs on the straps.

“There really was no brief, that’s what was so fun about it. So I wanted to add my signature elements — a lot of gold and high platforms, which I always tend to add on to shoes,” said Dellal. “I love everyone’s designs, it all comes together and you can tell who designed what without even seeing the name. I’d definitely wear Simone’s pair. Then again, I love everything she does.”

Other highlights included Blahnik’s interpretation, which featured romantic red rose appliqués, and Swarovski’s series of glitter-finished pairs with the soles spelling out the word “sisters” to capture the spirit of female empowerment that Women for Women is known for.

“Our design embodies the idea that together we are stronger,” said Nadja Swarovski.

Katrantzou said she wanted to embrace as much color as possible in her design, stacking three bright yellow, pink and blue pairs of flip-flops and layering them with Swarovski crystals.

The project was spearheaded by fashion entrepreneur Maria Kastani, an ambassador for Havaianas who works on yearly events to bring attention to the brand.

“I wanted to invite my friends and creatives to take part and create works of art. We gave them Havaianas and set them free and my brief for them was to be as creative as possible, no one had any boundaries,” said Kastani, who represents up-and-coming labels such as Alice Archer and Istanbul-based handbag label Mehry Mu.

“I must admit a lot of them surprised me. Arizona exposed her family in the most beautiful way, Manolo channeled the rose of Sicily and the colors and smells of the island, Dsquared was all about partying and fun. It was a beautiful way to celebrate color and fun with solid works that people will want to spend their money on.”

Brita Fernandez Schmidt, the charity’s executive director, said the designers’ creations were aligned with the message that Women for Women International wants to communicate.

“We support women in areas of conflict who have gone through traumatic situations, but if we are not positive, we won’t be able to change anything. The designers really got it and went for that spirit of positivity and sisterhood. There are so many different designers, which is great because our aim is not to put women in boxes, to show that they can be anything,” said Fernandez Schmidt.

She added that the proceeds from the auction will allow more women to join the charity’s yearlong support program and the exposure at Somerset House will also raise awareness about the charity.