Designers Turn Out for Bornfree Launch 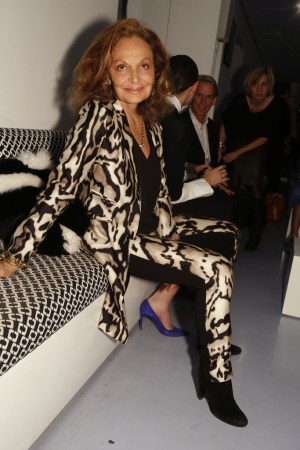 Russell Westbrook Talks Honor the Gift Expansion, Why Not? Academy

A WORTHY CAUSE: A group of designers — most of whom are also mothers — turned out for Wednesday’s press launch of Bornfree, John Megrue of Apax Partners’ project to end mother-to-child HIV transmission. Tory Burch, Jenna Lyons, Vera Wang, Georgina Chapman, Keren Craig, Veronica Swanson Beard and Veronica Miele Beard, Tamara Mellon and Liya Kebede were among those at DVF Studio to hear Diane von Furstenberg, Megrue, and Samantha Power, U.S. permanent representative to the United Nations, speak. “We’ve heard of the 1966 movie and we have listened to the Kid Rock song, but this concept of Bornfree has nothing to do with lion cubs or motorcycles,” Power said. “It is a slogan that captures the need for children — babies — to begin life with a fair chance at living life.”

A special collection of designer pieces will be available to aid the cause at Amazon’s Shopbop.com this spring. Cathy Beaudoin, president of Amazon Fashion, said there was “not a big thought process” to agree to participate in Bornfree. As she put it, “We have a platform to share the message, so it was an easy decision, a no-brainer.”