Filmmaker Baz Luhrmann is known to keep all the details of his films secret until their release, but jeweler Stefano Canturi has some insider information. 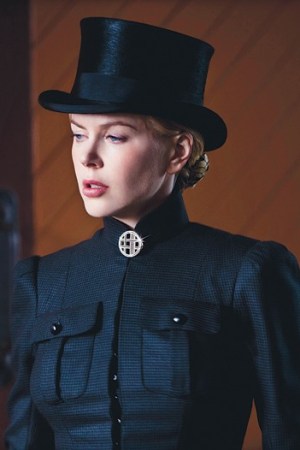 DIAMONDS DOWN UNDER: Filmmaker Baz Luhrmann is known to keep all the details of his films secret until their release, but jeweler Stefano Canturi has some insider information to share before the premiere in New York on Monday. Canturi designed the jewelry for Nicole Kidman’s character Lady Sarah Ashley in “Australia,” the new film about an English aristocrat who inherits an Australian ranch. Canturi, who plans to open a namesake boutique in Manhattan in February, worked alongside costume designer (and Luhrmann’s wife) Catherine Martin to create several pieces for the film, including a piece with a five-carat cushion-cut diamond, and a baguette-studded brooch. On Monday, Ferragamo, which collaborated with Martin on the shoes for Kidman’s character, will host an event with CS Magazine and screening with Chicago Link Production of “Australia” in Chicago. Local socialites such as Elizabeth Schick, Holly Hunt, Gigi Pritzker, Linda Johnson Rice and Sugar Rautbord are expected at a party afterwards where the limited edition shoe inspired from the film will be launched. On Tuesday night in New York, Ferragamo will host another screening.

This story first appeared in the November 21, 2008 issue of WWD. Subscribe Today.

TARGET TIME: Target has nabbed two new accessories brands for collaborations. Felix Rey designers Lily Band and Sulaika Zarrouk will launch a limited edition handbag collection called Felix Rey for the retailer on March 29. The line will be available until June 14. It is the seventh handbag launch in a series of limited-time-only accessories designers at Target. Also, footwear designer Trish Carroll has designed a limited edition shoe collection called Miss Trish of Capri for Target. The line will be available at select Target stores nationwide and on target.com from April 5 through June 14. Target has partnered in the past with accessories brands such as Hollywould, Devi Kroell, Sigerson Morrison and Botkier.

LUNCH LADIES: Lunch boxes emblazoned with superheroes may be a dime-a-dozen, but lunch boxes covered with supermodels are perhaps a bit harder to come by. Partygoers at this year’s Gourmet magazine sponsored “Lunchbox Auction,” will have the chance to take home such a collectible — thanks to Kelly Klein. Called “The Superbox,” the elementary school staple is decorated with Polaroid pictures of Linda Evangelista and Christy Turlington, taken by Klein. “I thought it would be beautiful to put all the supermodels that I have shot over the years all over this box,” explained the photographer. Klein is one of more than 50 bold-facers and brands — including Cameron Diaz, Lanvin, Diane von Furstenberg, Gwyneth Paltrow, Mike Meyers and Eva Mendez — to fashion a container for the Dec. 11 bash, held this year at Milk Studios.

Those unable to make it to the festivities can place bids for the boxes online — at thelunchboxauction.org — until Dec. 18. Proceeds will benefit hunger relief organizations the Food Bank for New York City and The Lunchbox Fund of South Africa.

COLOR ME HAPPY: Like most, jeweler Sharon Khazzam has been affected by the economic crisis, but she’s not letting it get her down. The designer, known for her exuberant use of color, is taking it one step farther. On Thursday evening, Khazzam, who sells exclusively to Barneys New York, held a private event at the Madison Avenue flagship to introduce Sharon Khazzam’s Rare Collection, a line of superluxe diamond pieces that retail from $50,000 into the millions. She brought a range of loose, rare-colored diamonds, including a 72-carat yellow diamond briolette, a pair of fancy vivid yellow ovals at seven carats each and a 1.5 carat dark gray-violet pear shape. “My soul is colored,” chimed Khazzam. “Even though I wake up on a gray day, I put something red or orange on. It changes my mood.” The average price for the designer’s signature jewelry line is $30,000.

MONDONGO MADNESS: Mondongo, the Argentine artist collective named after a traditional tripe stew, is making its U.K. debut with a show at Maddox Arts in London that runs from today through Jan. 10. Mondongo, founded in 1999 by artists Juliana Laffitte, Manuel Mendanha and Agustina Picasso, is showing their signature painterly collages made from materials ranging from freeze-dried food to baby pictures to doll’s hair. Earlier this year, Londoners got a taste of Mondongo’s work thanks to Rei Kawakubo, who plastered images by the collective around Dover Street Market as part of an exhibition called “Printed Matter.” “When I first discovered Mondongo from a small article in a magazine, I knew immediately I wanted to work with them,” Kawakubo told WWD. “I felt an affinity with them, since they seemed to be kind of outsiders to the established system.” Kawakubo also mined Mondongo’s archives this fall, reworking some of their collages for the cover and inside pages of Wallpaper’s October issue, which she guest-edited.