The blogger will use eucalyptus in an upcoming fragrance. 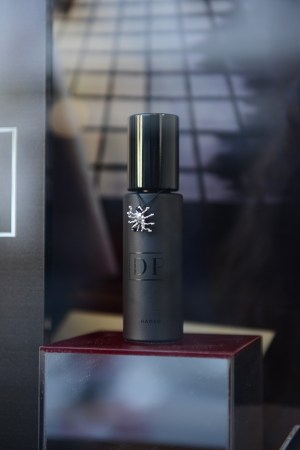 BEAR HUG: Diane Pernet, in all her Gothic glory, was in London earlier this week to celebrate the takeover of Liberty’s beauty windows with four films created in collaboration with the British director Mike Figgis.

The films, styled by fashion editor Tina Leung, mark the launch of four fragrances at the store. Each film is an ode to a different Pernet scent, which were created with Celso Fadelli, chief executive of Intertrade Group. The fragrances launched last year and more are in the pipeline.

Pernet, the blogger behind A Shaded View of Fashion, also created the international fashion film festival “A Shaded View on Fashion Film” in 2008. During a party at Liberty’s to mark the films’ launch, she said she had been a long-time admirer of Figgis’ work, and has herself appeared in several films, including “Pret-a-Porter,” the 1994 film by Robert Altman.

“Fashion, film and fragrance are the loves of my life,” she said.

There is, however, something else she is passionate about: koalas.

“I am so in love with koalas! I’ve always had a thing for them,” she told WWD. “Growing up, I had a friend from Sydney, and we would all have toy koalas on the end of our pencils. Then, the last time I was in Perth, Australia, I said I’d only go if I could hold a koala because it’s been a dream since childhood. So I got to hold one called Sunshine, and I was so surprised by how heavy she was.”

Pernet said that she’s aware of all the health problems koalas face, such as chlamydia, and the fact they are threatened by bushfires and land developers in their native habitats.

“So I said to Celso that I want to do something so that a portion of the profits can go to helping Save The Koala, a charity,” Pernet said, adding that she was inspired by their plight to use eucalyptus — the koala’s favorite food — for a future fragrance.

“It’s far too strong, and it smells kind of like medication,” Pernet added of the leaf. “It’s a difficult material to work with, but I’m sure we’ll arrive at something good.”