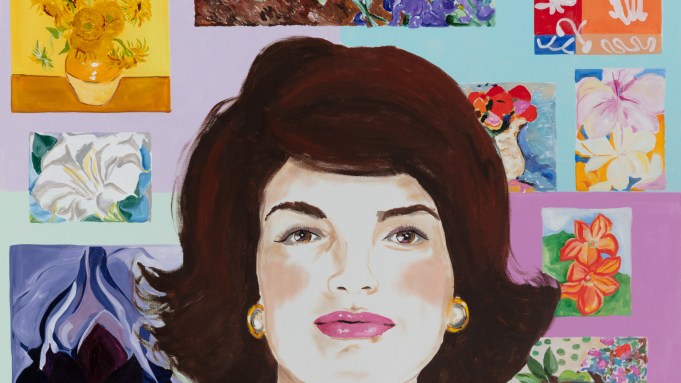 After meeting Longshore over tea in London in December, von Furstenberg had the idea to put together a collection of Longshore’s art. She gave Longshore a list of women who have inspired her through their energy and achievements.

“I was immediately impressed by Ashley’s contagious enthusiasm and vibrant talent,” said von Furstenberg. “I knew she was a ‘Woman in Charge,’ and I felt she would be perfect to curate our next inspiration room especially with International Women’s Month approaching. The collaboration felt seamless.”

Longshore, who is based in New Orleans, painted a collection of 37 portraits of such women as Ruth Bader Ginsberg, Jackie Kennedy, Cleopatra, Marlene Dietrich, Oprah Winfrey, Gloria Steinem, Michelle Obama, Elizabeth Taylor, Maya Angelou, Whitney Wolfe Herd and Rosa Parks, some wearing von Furstenberg’s most iconic prints and designs. The curated art collection will be unveiled Thursday during von Furstenberg’s International Women’s Day activities and will live in the flagship at 874 Washington Street in the Meatpacking District through May. The artwork will also be available for purchase.

Asked how she decided on the women, von Furstenberg said, “I chose iconic women who have left significant impacts on the world of science, literature, entertainment and philanthropy. They are truly are women in charge, both past and present.”

In a telephone interview, Longshore said she met DVF chief executive officer Sandra Campos at a Lingua Franca event on Bleecker Street in New York last November, and Campos said, “Diane and I love your vibe” and they wanted to do something together. Coincidentally, Longshore was in London in December at an unveiling of her Gucci ArtWall, and she stayed at Claridge’s, where DVF had designed the hotel’s Christmas tree. Longshore e-mailed Campos and found out von Furstenberg was going to be there.

Longshore thought it would be a five-minute meeting, but they sat down together and had tea for 45 minutes.

“We talked about my artwork. I’m a self-taught artist from Montgomery, Ala. What are the odds of that? I feel so many times that the universe is in my favor,” said Longshore. During their meeting, von Furstenberg explained that she was doing an event for International Women’s Month.

“We had the best tea. It was so great, and she said, ‘I don’t want you to use glitter, or bedazzle or resin. I want this to be a very raw version of you, Ashley, because I think you are an amazing painter, and I don’t think you need all that.’ I said, ‘Look, you’re Diane von Furstenberg, you’re curating me. You tell me what you want,'” said Longshore, whose been dubbed by The New York Times as “Fashion’s Latest Art Darling.” She was the first female artist to have a solo exhibit at Bergdorf Goodman, and she designed the new Palette at Bergdorf’s.

Von Furstenberg sent her a very long list of women that she loves.

“It’s people all the way from Colette, Marlene Dietrich, Mother Teresa, Amelia Earhart, Josephine Baker, Rosa Parks, Oprah Winfrey, Lady Gaga, Beyoncé, Michelle Obama….these women that really span generations. The one thing they have in common is they’re absolutely fearless women, being exactly who they are and doing exactly what they love and were born to do,” said Longshore. “It’s really been such a great journey for me to create all those pieces knowing I wasn’t adding glitter or shine. They’re just so magnificent together. The colors are so powerful. You can imagine how inspired I feel standing back and looking at all these incredible faces of these extremely accomplished women,” she said.

Some of the portraits are 9 by 6 feet. She said she surrounded Jackie Onassis in beautiful paintings of flowers, and made reference to Georgia O’Keeffe. In the large portrait she did of DVF, she surrounded her with some of her favorite women, such as “The Girl With the Pearl Earring,” Mona Lisa, Frida Kahlo, Venus de Milo and Coco Chanel.

Approached in December, Longshore said she didn’t have a whole lot of time to compete the project.

“I created 37 paintings in two weeks. I was painting with an ice pack on my shoulder, and taking lots of Advil and icing my wrist at night. It was totally worth it. This is what I was born to do. You get an opportunity from an iconic, incredible woman like Diane von Furstenberg and you paint until your fingers bleed,” she said. The paintings will range from $7,000 to $46,000, depending on the size.

There are no plans for prints. “That’s the opposite of what I do as a brand. They could do all that when I’m dead,” she said.

Von Furstenberg is throwing a party March 7 to unveil the artwork from 6 to 8 p.m., with a guest list that hopefully will include some of those whose portraits were done. “They’re Diane’s friends, so I hope so,” said Longshore.

“I think it’s such an amazing time to showcase these women. It’s so important to have all these diverse women from all these backgrounds from all over the world, for people to come in and see themselves in all of them. I think it will be really powerful,” said Longshore.

“This is the best body of work I’ve ever done,” said Longshore. “It’s so raw and pared-down. Diane made me feel really vulnerable, which is something I keep saying I want to work on…she really has been a teacher. I researched all these incredible women and learned so much about women I knew nothing about. I’ve learned a lot about myself, too. She’s right. I don’t need glitter and bedazzle and gloss. She really challenged me. What an honor to be curated by such a fashion icon.”

Von Furstenberg added, “It’s a pleasure to have been able to collaborate with Ashley and see my heritage prints and patterns intertwined within her artwork and I’m proud to support empowering such an incredible artist and woman.”

Do you think these women might buy their own portrait?

“I don’t know,” said Longshore. “For me, I wouldn’t want to live with a portrait of myself, it’s a little weird. But everybody’s different. I would love for Lady Gaga to buy her portrait, or Barbra Streisand, or Gloria Steinem. I would faint if I met her. I’m going to this private dinner party at Diane’s apartment Wednesday night and I have no idea who’s going to be there. If I walk in there, and some of these women are there, I’m going to need some smelling salt. They’re going to have to carry me out of that place on a gurney.”