The Municipal Art Society of New York gave its Jacqueline Kennedy Onassis Medal to the designer for her work to revitalize the Meatpacking District. 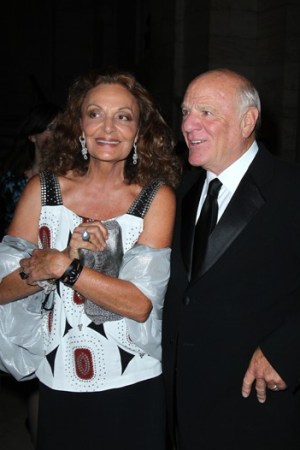 The Municipal Art Society of New York awarded its Jacqueline Kennedy Onassis Medal to Diane von Furstenberg at its annual spring gala at the New York Public Library on Thursday night. The award goes annually to a New Yorker who, like its namesake, has worked to preserve the city’s great architecture. Von Furstenberg was honored for her hand in re-shaping the Meatpacking District with her Washington Street flagship and in the construction of The High Line park.

Asked to name her favorite New York institution while on a short break from receiving a steady flow of well-wishers, von Furstenberg took long pause.

“Well this is a good one,” she said surveying the grand entrance of the library’s Stephen A. Schwarzman Building. “The library. Everything about the library is about quality.”

Did she spend much time in libraries?

“Less now, but I’m happy they exist,” she said.

Among those on hand to toast the designer were husband Barry Diller (whose check-cutting skills, von Furstenberg dapped in her acceptance speech) Oscar and Annette de la Renta, Arie and Coco Kopelman, Nicole Miller, Philip Crangi and Terence Koh. As guests made their way to dinner, WWD asked Norma Kamali if there were any city institutions she wouldn’t mind having torn down, a great New York tradition in its own right.