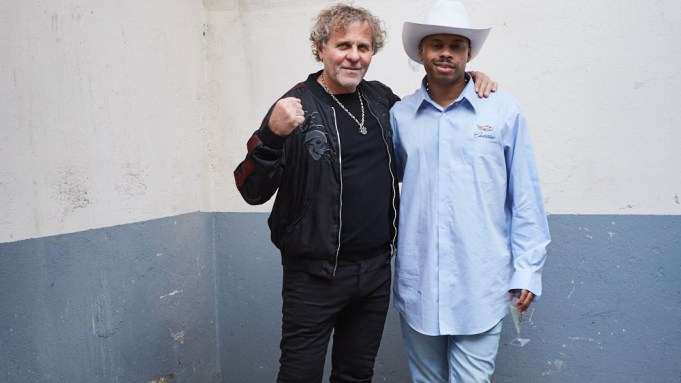 WORD ASSOCIATION: “A commercial performative event,” read the invitation, rather obliquely. As guests walked into the crowded Left Bank garage space Saturday evening, the music booming, the ambience clouded with smoke, open-sided cages hanging from scaffolding and moving in seemingly haphazard directions, the sense of alienation was palpable.

This was the disconcerting backdrop for the reveal of Diesel Red Tag Project, a series of collaborations with edgy designers on a set of capsule collections. First up, Hood By Air’s Shayne Oliver, who was behind the bizarre wording, the staging and the clothes presented.

“No one is intrigued by fashion shows anymore, because we are so used to looking at them from this scope,” said Oliver backstage, where the decibels were more manageable. “Designers do so much work, and you look at it on a runway and it’s so blah, blah, blah,” he continued.

On a hiatus from Hood By Air, Oliver is working on a series of collaborations, including a special collection for Helmut Lang that launched last September.

“I’m basically working with masters of crafts, I’m working with Diesel and I have others coming. It’s going back to school, because I never went to fashion school,” Oliver explained. “I created my fashion silhouettes on my own, figuring out what fashion meant to me, and now I’m going back and refining it.”

For Diesel, whose jeans he said he grew up wearing, he created a selection of pieces that reinterpreted its denim and sportswear codes, using unconventional cuts on jeans, dresses and shirts and creating boxy, reconstructed jackets and thigh-high boots featuring giant logos.

Referencing the label’s tagline “For Successful Living,” he said, “I get that. It’s about having successful ideas, I think that is what’s lacking right now, and what makes fashion so wasteful and not resourceful.”

His designs were presented within the cages, their wearers — both guys and gals — moving around their mini-stages in a form of abstract pole dance.

“Diesel is back,” said the brand’s founder Renzo Rosso, in the midst of the hubbub upstairs. “I am back also in driving Diesel, because I was out running all the other companies and brands and other businesses, but I needed to be back, this is my blood, it’s my baby.”

In December, Diesel parted ways with artistic director Nicola Formichetti after a four-year tenure, as reported, with Rosso now back to driving the brand’s direction.

“The product is totally different, the communication is becoming cool like it used to be before,” he said.

The choice of an American designer for its first collaboration was intentional.

“The real coolness in casual is coming from the U.S.,” Rosso said. “Jerry Lorenzo, Mike Amiri, Kanye West, Virgil [Abloh]…they are all American. Shayne is American. We want to bring this kind of interpretation of our heritage, what we have done before, and do this modern interpretation,” he said, with the aim of returning to “what Diesel was before: innovative, creative, to create a dream, to create desire.”

Curated and distributed by Tomorrow London Ltd., the line will be available in around 50 stores worldwide, Rosso said, and will not be offered in the brand’s regular distribution.