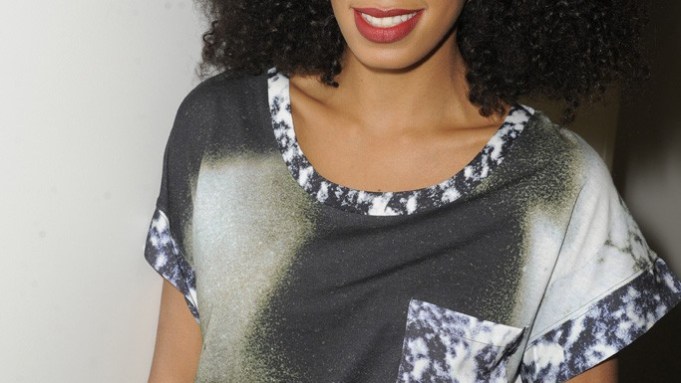 AFRICAN BEATS: Diesel took over Paris’ Gaîté Lyrique theater on Sunday to launch its 25-piece capsule collection with Edun, the clothing label founded by Ali Hewson and her husband Bono. It is manufactured in Africa with cotton from Uganda.

Bono, wearing Edun pants, said he did not advise his wife on the collection. “Our marriage would end if I advised Ali on design,” the U2 singer said, with a smile. “Unfortunately, this is not an equal equation; she knows a lot more about music than I know about fashion.”

As for cotton, Bono described it as “a beautiful thing. I love to be in the cotton fields.”

Solange Knowles performed her song “Losing You,” while wearing a Diesel dress, Kenzo shoes and assorted jewelry. “I have a little bit of a ring obsession,” she confessed backstage.

Knowles first met with Bono when she was 17. “I was going to Johannesburg,” she explained. “He was part of charity initiative with Nelson Mandela [and] there was a big concert. I sat next to him on the plane between South Africa and Houston. I went there with my sister, who was performing.”

Jessica Alba, sporting Maje knitwear and Céline, said she is going home after the shows to launch her new lifestyle book that includes recipes and organizational tips. It was published by Rodale.

The party continued with African singers and dancers’ performances. “I love African music; it carries you away,” said von Unwerth, while snapping photos of the party with her small digital camera. “I was taking African dance lessons when I was young, but I saw myself in the mirror and I stop right away, as it looks totally ridiculous on me.”