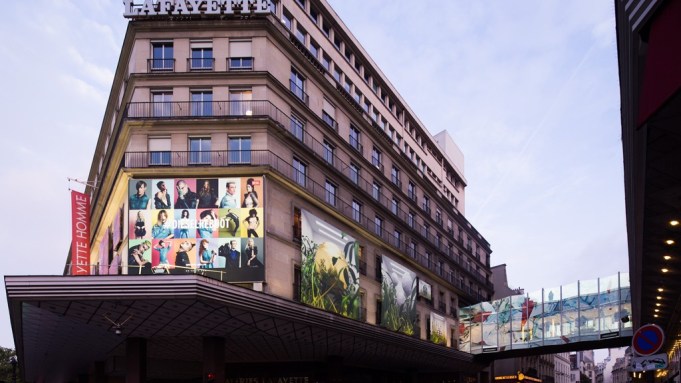 DIGITAL FRONTIERS: Diesel has taken over the windows, facade and interior of the Galeries Lafayette flagship in Paris with a project showcasing 1,000 little-known digital artists who display their work on micro-blogging platform Tumblr.

Diesel artistic director Nicola Formichetti selected the works submitted on the #Dieselreboot Tumblr, choosing five artists to create oversized custom installations dotted throughout the interior and exterior of the store, and plastering the other hundreds of images across its windows in a colorful collage.

“It’s my hobby. I’m on Tumblr every morning and every night, going through the feed. That’s how I do my research. I don’t use Google anymore, I just use Tumblr, because it’s much more specific and you get much better image research. So for me, it was really easy,” he said.

The art is to remain on display until Oct. 24. Surveying oversized prints of the digital works hung under the store’s 101-year-old cupola, Formichetti said he was interested in juxtaposing new technology with tradition.

“It’s interesting to bring unknown talents into something really, really established,” he said. “I want to take the digital art and put it on paper in a kind of very rough way…I wanted it to have this kind of raw attitude, a bit punk. And also it’s great that every photo has their social media address.”

Formichetti was joined at the launch by Diesel founder Renzo Rosso and Guillaume Houzé, director of patronage and image at Galeries Lafayette, who oversees the department store’s private collection and projects supporting artists.

The stylist, who joined Diesel in April, will shortly unveil his first capsule collection, set to land in stores on Nov. 1. The Diesel Tribute line of 20 looks for men and women features archival looks customized with badges and studs.

A second capsule collection of all-leather pieces will be launched in February, before Formichetti presents his first full collection at an event in Venice — where Diesel is sponsoring the restoration of the Rialto Bridge — scheduled to coincide with the next round of ready-to-wear shows in February and March 2014.