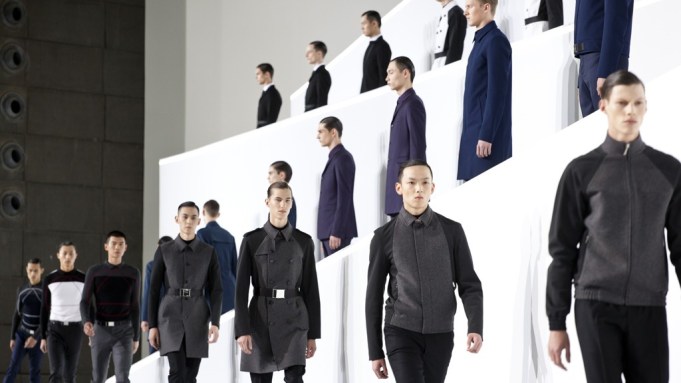 BEIJING — Dior Homme staged its first runway show outside of Paris on Thursday in Beijing, bringing the elegance and futuristic glamour of its 2013 ready-to-wear collection to an airy art space in the Chinese capital.

The show drew about 600 guests, including a long list of Chinese celebrities and fashion fans, who took on a studied air of understated elegance. Forty international models, including a selection of young Chinese men, showcased the rtw line by cascading down a dramatically curved staircase meant to convey the experience of arrivals via a time machine.

Despite his grueling hours in Beijing, Kris Van Assche, Dior Homme’s creative director, was clearly energized by the experience and ready to show off his collection to the world’s fastest-growing luxury market. In China, men’s luxury clothes and brands often sell at higher volume than those for female consumers, so this was a particularly important choice as the first runway showing of Dior Homme outside its French home.

As well as the “Gattaca”-inspired collection the brand presented in Paris, Van Assche added to the Beijing collection staging, showing three new Dior tuxedos specifically for the Chinese market. The designer said he believes tuxedos will find a strong market in China, where growing wealth has been accompanied by more sophisticated tastes.

“They’ll only be made in China, so that’s for sure,” Van Assche said. “But it’s something I suggested we could do because we had the same show in January in Paris. It’s more interesting for everybody if we add something new.

“After seeing my own show in January, I kind of felt like the first looks were very strong, the black suits, so I was happy to be able to add three more of those looks,” he added.

Though this was his third visit to China, Van Assche did not have much time to explore Beijing or Shanghai, but was planning to step out on Friday and Saturday to the Great Wall and for a further taste of local life in Beijing. As for his initial impressions, Van Assche said he was impressed by the attention to detail among Chinese people who dress up.

“China and Beijing are huge, so you get a lot of diversity,” he said of the overall aesthetic. “I’ve been to some fancy restaurants and I’ve been around. People tend to dress up. People tend to pay a lot of attention to the way they look, which is obviously something I appreciate.”

Yet, he added, “Young kids in the street look quite similar to young kids anywhere.”

The half-hour runway show was a cavalcade of high energy, far from some of the more sedate, quieter international shows that have been staged in Beijing. A surprise guest added to the excitement when a bat flew into the room, a massive, airy space at the China Academy of Fine Arts Museum.

Chinese film stars Huang Xiaoming, Deng Chao and Tong Dawei were among the celebrities in attendance, along with pop stars Han Geng and Huang Lixing. Other domestic actors, singers and stylists also joined the party.

Following the show, the British synth-pop duo Hurts got the crowd dancing. At one point during the musical performance, the bat, or one of his brethren, swooped briefly back in for an encore appearance. To the jovial crowd grooving to the beat, it seemed a fitting moment for a full-moon evening in Beijing.