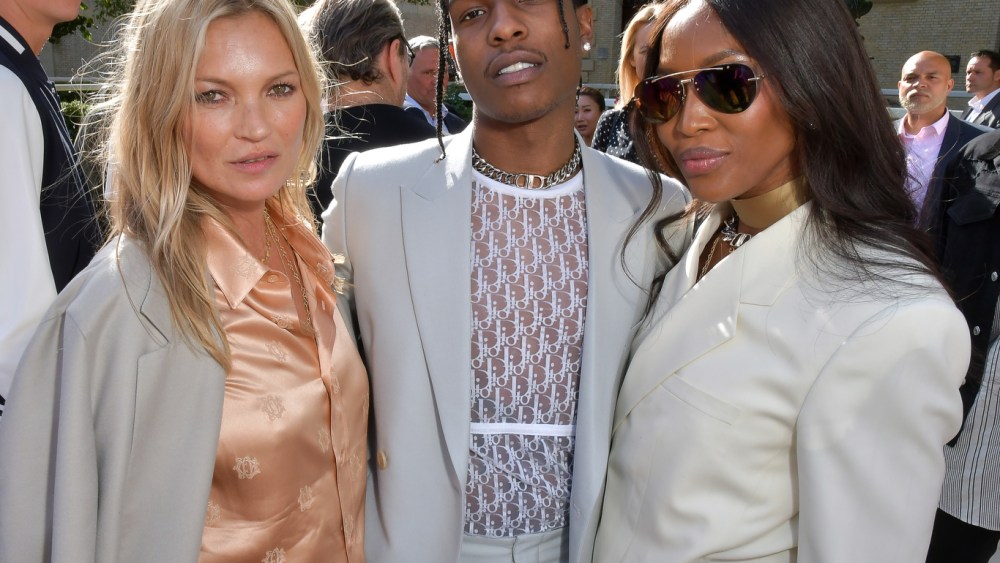 IN FASHION: Paris rarely gets to see so many designers in one place. Karl Lagerfeld, Virgil Abloh, Victoria Beckham, Giles Deacon, Haider Ackermann, Kenzo Takada and Chitose Abe were just some of the talents who attended Kim Jones’ debut show for Dior Homme on Saturday at the Garde Républicaine. Guests were greeted by a towering floral statue of Kaws’ BFF character reimagined as Christian Dior and his pooch, and covered in some 70,000 blooms.

Sweeping in on the arm of Lenny Kravitz, Naomi Campbell said she was feeling “very proud, very happy.”

“Kim is the one that embraces all the young designers and brings them into the fold and I think that’s really rare. He’s a special human being,” she said, breaking off to catch up with Kate Moss front row.

Kelly Osbourne said Jones had given her a preview of the set two days prior to the show. “To be here today, it’s a dream come true for him but also for all of his close friends. We’re all so proud, we all think we’re going to have a Virgil [Abloh]-Kanye [West] moment day today — with all of us; it might be the entire front row,” said Osbourne, who is currently filming A&E Network’s “Ozzy & Jack’s World Detour,” with her father, Ozzy Osbourne, and her brother, Jack.

Bella Hadid had picked out a bright yellow suit and high-tops from the collection to wear to the show. “I’m excited to see it walk and move, it’s going to be absolutely beautiful,” she said.

Taking in the Kaws statue, French actress Joséphine de La Baume said she has “a little teddy bear called Arthur.” She chatted about her experience filming “Waiting for Anya” with Anjelica Huston. “She is so fun, she has amazing stories, she’s had quite a dense life.”

“I don’t think I was even that much into toys when I was a kid, to be honest, I’m a bit of a loser,” shrugged Robert Pattinson, who took in the show with former Dior Homme creative director Kris Van Assche. “It’s just so different, it’s really colorful, light; I’m curious to see what everyone’s reaction will be,” said the actor, who is about to start filming the Shakespeare-inspired film “The King,” costarring Timothée Chalamet, in Hungary.

Lily Allen said she was feeling “anxious but excited” for Jones. “I expect nothing but genius,” deadpanned the singer, who had dyed her hair a hot shade of candy pink four hours before the show. “Kaws’ best friend,” she quipped with a chuckle.

Later that evening, Dior filled Caviar Kaspia with giant bouquets of black roses — and a good chunk of its glitzy front row.

Both dressed in jean jackets, Joe Jonas chatted with Darren Criss about his concert on June 30 with his band DNCE, a supporting act for Bruno Mars at the Stade de France.

Asked about his stage costumes, Jonas said he was leaning toward the bright and graphic designs of Kenzo, figuring they would telegraph well in the vast stadium. “In Paris, there is so much to choose from,” he said.

Honey Dijon table-hopped during the dinner, wearing a Dior denim suit festooned with bees, and squealed with delight when told she looked “bee-utiful.”

After the wild strawberries were cleared, she hit the decks and the party kicked up a notch.