The house gave a sneak peek Tuesday night of its recently renovated Dior Institut in the Hôtel Plaza Athénée Paris. 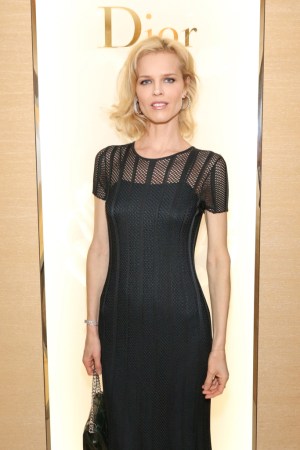 GETTING THE TREATMENT: Dior gave a sneak peek Tuesday night of its recently renovated beauty institute that opened its doors to the public today in the Hôtel Plaza Athénée Paris.

The sprawling space boasts five treatment rooms (including one for two people), each named after an important facet in the Dior brand’s history, such as Dior Prestige, the skin-care line whose color code inspired the new spa’s decor, and Montaigne, a nod to the avenue in Paris where Dior is headquartered.

Dior’s link to the Plaza Athénée goes way back. It was there that Christian Dior staged his first fashion show in February 1947.

Dior has had a spa at the hotel since 2008, but the recent renovation to the Dior Institut marks its most sweeping to date. Details include textured wooden walls, marble floors and a relaxation room.

Herzigova tried out a treatment earlier in the day, did a walk-through of the spa and then chatted with partygoers.

The model admitted she doesn’t generally have much time for massages. “But I really love facial massage — deep tissue massage with products,” she said.