The birth of Air Dior.

Dior and Jordan Brand are ending this decade with a special collaboration sneaker dubbed the Air Jordan 1 High OG Dior, which made its debut Tuesday night at the Dior pre-fall 2020 show in Miami during Art Basel Miami Beach.

Nike produced the first Air Jordan sneaker that was unveiled on NBA player Michael Jordan in his rookie season in 1984 and was officially released to the public in 1985 — nearly 40 years after the founding of Christian Dior’s company and almost 30 years after the founder’s passing. While the legacies of Dior and Jordan crossed paths sartorial through street style, they formally meet through this collaboration sneaker thanks to Dior men’s artistic director Kim Jones.

“I chose to collaborate with Jordan Brand because Christian Dior collaborated with the best American brands of his era,” Jones told WWD. “I love mixing together different worlds, different ideas — Dior and Jordan Brand are both emblematic of absolute excellence in their fields. To bring them together in this special collaboration is to propose something exciting and truly new.”

Jones is also “mixing together different worlds” through a collaboration with Shawn Stussy for the Dior pre-fall 2020 collection. But while Stussy applied his art style to the atelier, Jones married the codes of both Air Jordan and Dior in the collaboration sneaker, which also commemorates the 35th anniversary of the Air Jordan 1 and the first Dior men’s show in the U.S.

The Air Jordan 1 High OG Dior is made in Italy, features elements found in the original Air Jordan 1 such as stitching on the sole, and classic details found in other Dior products. The cream upper is complemented by a shade of gray that had been a signature of the atelier since its founding in 1947 (and bears resemblance to a black and gray Air Jordan 1 that also launched in 1985); the leather, which was supplied by Dior, has painted edges that are a nod to the French brand’s bags and accessories, and the “Swoosh” is embroidered with the house’s Oblique motif, which is also laser etched into the insoles. 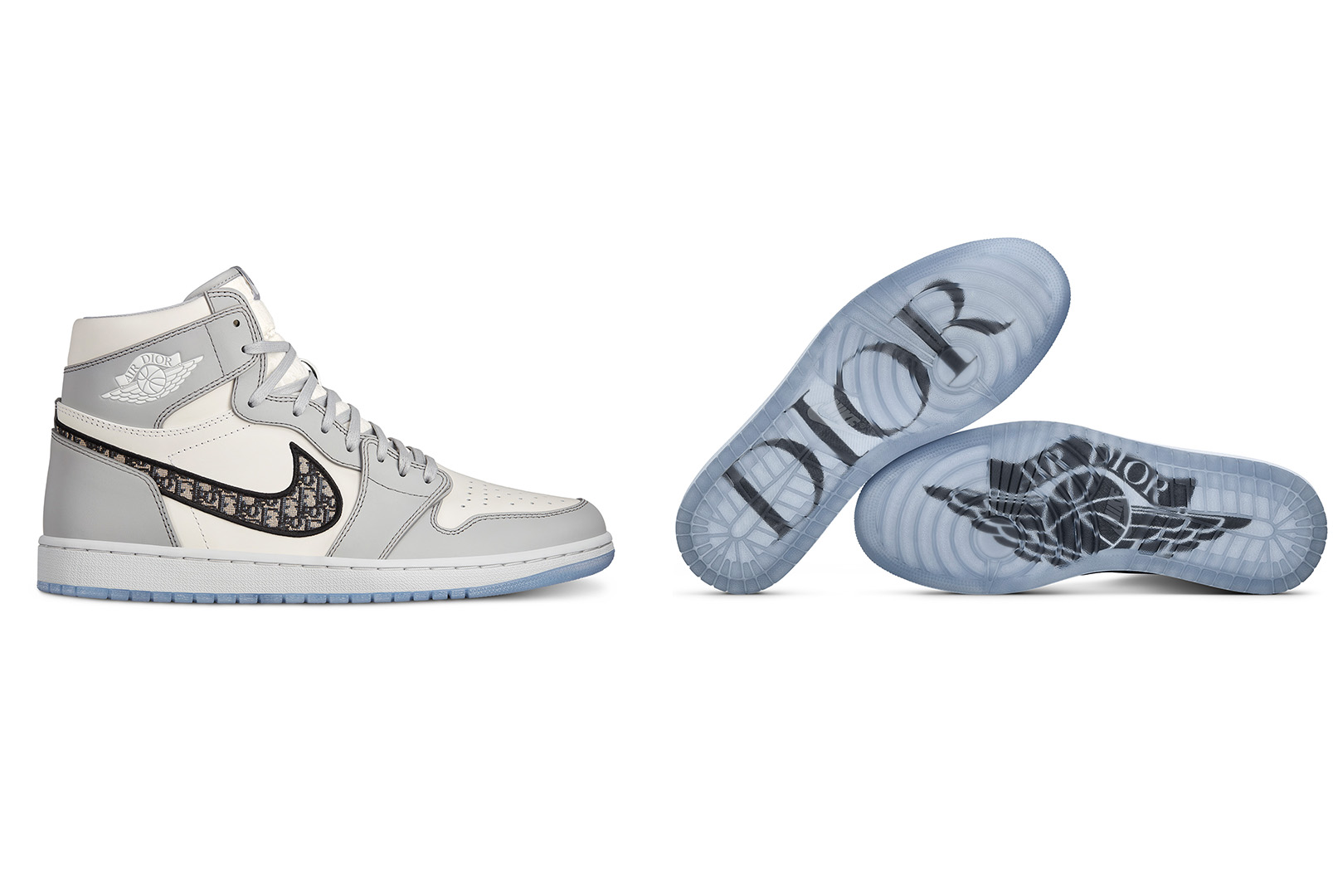 The tongue is nylon with a custom Dior and Swoosh tag, the laces have metal tips and the outsole is a clear blue, with the right sneaker bearing the Dior logo and the left one featuring a special “Air Dior” logo that plays on the “Air Jordan” wings logo.

“It has the feel of Sixties travel, which seems extremely luxurious to me,” said Jones about the logo. The “Air Dior” logo is also on the ankle of the left sneaker, as well as the Jumpman symbol, its only appearance on the collaboration.

“Every collaboration we do starts from a genuine connection and desire to expand the dimensions of each brand through creativity and design innovation. Our partnership with Dior will offer a new look in basketball style and blend high-end streetwear with luxury fashion,” said Jordan Brand vice president of design Martin Lotti. “We will pay homage to both brands’ rich iconography and draw inspiration from our heritage.”

The partnership between Dior and Jordan is part of Jones’ Miami and Art Deco-inspired men’s collection for Dior that references the atelier’s archive and moments from the Sixties. The Air Jordan 1 High OG Dior is the just the beginning for Dior and Jordan Brand. Although they declined to provide details, the two said that there is more to come.

The Air Jordan 1 High OG Dior collaboration sneaker will be available at select global Dior stores in April, and the price has not been revealed.