An installation by artist Marco Lodola was created for the facade of the store and the brand's boutiques inside.

The Saks facade reimagined by Dior.

In what marks a first for the luxury department store, Saks Fifth Avenue has turned over the facade of its flagship to Dior, which has created a light installation of colorful faces and silhouettes designed by Italian visual artist Marco Lodola. The installation will remain in place through May 26.

Lodola’s work was the inspiration for the house’s fall collection and there will also be animations in Paris at the company’s Champs-Élysées and Saint-Honoré boutiques, as well as in Milan, Rome and Forte dei Marmi in Italy, Seoul and Shanghai along with other special concepts in Athens, Toronto and at Harrods in London.

At Saks, Dior has taken over the six center windows and is also reimagining spaces throughout the store with visual installations featuring Lodola’s designs in colors coordinating with the new collection in the brand’s handbag and ready-to-wear boutiques, the beauty department, the men’s department and at the Fifth Avenue Club, which includes a suite personalized by Dior for a VIP client experience, according to Saks. 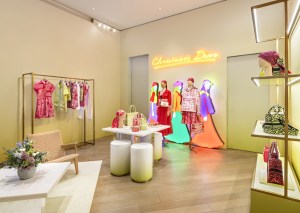 The Dior installations will remain through the month of May.

Tracy Margolies, chief merchandising officer for Saks, said the retailer is eager to “deliver a unique shopping experience through the display of Marco Lodola’s colorful and optimistic artwork.”

Lodola said in translating his art to installations, “the starting point is the light. I used the technique of the luminous boards — what Filippo Tommaso Marinetti called ‘luminous warnings’ — for the Dior boutique in Saks Fifth Avenue, one of the most important and famous department stores in the world. We wanted to maintain a deep respect for the city that hosts the store so that the boutique and its scenography would blend perfectly with the personality of the city, while preserving the Pop style of the installation. For Saks Fifth Avenue in New York, we reinterpreted motifs in my artistic universe — like faces — in the store’s display windows and on the facade. Inside, we reinvented the Vespa and Dior silhouettes.”

Outside New York, Lodola was inspired by London’s double-decker buses for a pop-up shop and window installation at Harrods, caryatid stone figures for Dior’s Athens boutique, the Toronto skyline for the unit in that city and the N Seoul Tower for that store. In these locations, he used “colorful, anonymous faces, without distinctive features, that reinterpret one of my Pop motifs,” he said. “All the decors are different and, in each city, we reinterpreted the cultural ambience of the place, with the LED lights that are key elements in all of my works.”