Camille Rowe and Devendra Banhart were among guests at Les Bains in Paris on Monday night. 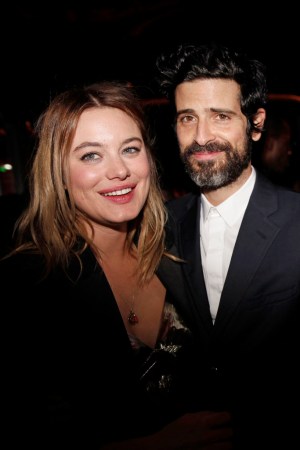 PICK YOUR POISON: Dior took over Paris nightclub Les Bains on Monday night to celebrate the launch of its new fragrance, Poison Girl.

Flanking each side of the ground floor were giant projected images of the advertising film lensed by So Me – and its making-of – starring Camille Rowe.

“It was shot all at night, and I go to bed so early that it was very difficult for me to stay up. There was a lot of crazy caffeine nights,” Rowe said with a laugh, explaining that often she gets into bed at 9:30 p.m., reads for an hour and then is fast asleep.

The model is to start filming a French movie on Feb. 1, but remained mum on further details.

If she had to pick a poison, what would it be?

For his part, Rowe’s beau Devendra Banhart, who was chatting with her folks, offered up his preferred poison without skipping a beat.

“Oh, mine would be Camille,” he exclaimed.

The singer is about to finish an album, which will probably be released this summer.

Les Bains pulsed with revelers, many of whom opted to enclose themselves in a cage-like structure (think warehouse elevator) in the center of the room, where their images were taken against a New York cityscape that serves as the backdrop of the new Poison Girl ad. The pictures, in turn, were transmitted to social networks and could be printed out, as well.

Among attendees at the bash was designer Hugo Matha, who just launched his men’s accessories line and said he would be introducing a women’s ready-to-wear collection in September.

Ali Mahdavi is also juggling numerous projects simultaneously, including work on the next Dita Von Teese show at the Crazy Horse, where she is to appear for the third time. For Von Teese’s “Undress to Kill” number, he said they’re using technology such as mapping “to do what we hope will be the striptease of the 21st century.”

The perfume was just released in the Middle East, prior to its launch in Europe and South America in early February.