The designs are from Ji Cheng, Han Lulu, Cindy Soong and Makin Ma. 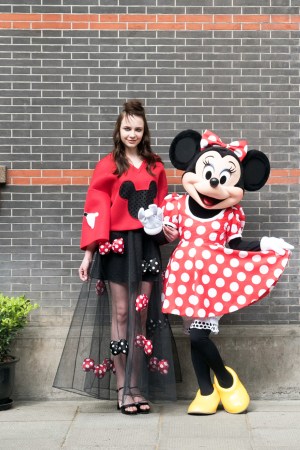 The designs are from Ji Cheng, Han Lulu, Cindy Soong and Makin Ma. They will introduce these looks during Shanghai Fashion Week on Tuesday.

Since her launch in 1928 alongside Mickey Mouse in “Steamboat Willie,” Minnie Mouse has made her impact on the fashion industry. She has served as a muse for designers for decades, and her influence has been seen in fashion weeks and runway shows in New York, Paris, Tokyo and London.

“Minnie Mouse is Disney’s fashion star,” said Allen Au-Yeung, vice president of product creative, The Walt Disney Co. Greater China. “Since Minnie’s inception her classic polka dots and red bow have always been on trend and continue to appeal to young adult females in China and around the world.”