Her signature line will debut next month in select department stores and chains including Alain Afflelou in France, Italy and Spain. 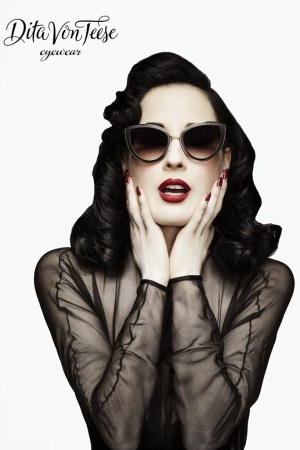 DITA EYES SUNGLASSES: Dita Von Teese has inked a deal with Los Angeles-based eyewear maker DITA Inc. to produce a signature line that will debut next month in select department stores and chains including Alain Afflelou in France, Italy and Spain. Dita Von Teese Eyewear features 10 styles ranging from classic cat-eye to edgier cut-out metal and acetate frames retailing from $235 to $285. “The inspiration behind the Dita Von Teese collection was to create elegant feminine styles with a classic flare that women could wear on any occasion. Dita Von Teese personifies the quintessential woman with a sartorial grace that is unique,” said DITA Inc. co-founder John Juniper.

His partner, Jeff Solorio, added, “She evokes the American sensibility of a time lost, when people paid close attention to the details that became synonymous with accessories such as eyewear.” Von Teese and Juniper have been friends for over 20 years, and the burlesque queen appeared in the company’s DITA brand ad campaign last season. Their matching names are not a coincidence; Juniper had always loved Von Teese’s name and it inspired the name of his company. She modeled their first prototypes, but her upcoming collection marks her first official entry into eyewear.

“I don’t employ stylists; I’ve always been self-made and self-taught, so it makes sense for me to use my styling talent in a different way than just in creating my shows, photos and on the red carpet,” said Von Teese of expanding her fashion empire, which also includes fragrance, dresses and lingerie. “Although I love frames with retro flair, I don’t like to wear authentic vintage glasses because the proportion is rarely correct for a present-day face; they are usually too small, and end up looking grandmotherly,” she explained. “The way to capture the elegance and spirit of vintage style is to understand that it must be done with a contemporary twist to make it current and sexy. This is what this collection is about: sexy, wearable eyewear that conveys high-glamour and elegance.” She added, “It certainly isn’t a line of disposable fashion glasses; they’re made to last.”