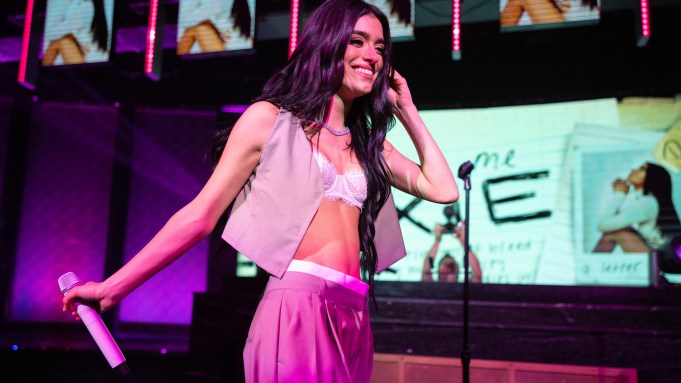 Dixie D’Amelio kicked off the release of her debut album with a star-studded gathering.

The TikTok star celebrated her anticipated project, “a letter to me,” which dropped on June 10, with a party at the buzzy Los Angeles nightclub Nightingale. She wore a two-piece beige vest suit over a lace white bralette paired with shoes by Dr. Martens. She styled her long black hair in loose waves and kept her makeup simple.

Throughout her career so far, D’Amelio has worked with high-profile celebrity stylists such as Mimi Cuttrell, Maeve Reilly and Andrew Gelwicks.

Among those who attended the party include social media stars Larray and Tana Mongeau, D’Amelio’s mom Heidi, Derek Hough and Tiffany Haddish, among others. During the event, D’Amelio performed multiple songs from her new album.

Earlier this month, the social media star spoke with WWD about her new project, saying that the song that the album is named after is one of her favorites.

“It really felt like it embodied the entire album, because I am talking to myself,” she said. “I am trying to figure out which direction I’m going on in life.”

Last year, D’Amelio launched a clothing line with her sister Charli, who is the most popular user on TikTok, called Social Tourist, which was created in partnership with Hollister. She was also named an ambassador for Puma.

The TikTok star has also worked closely with Burberry and Valentino, with the latter dressing her for the 2021 Met Gala, which marked D’Amelio’s first time at the event.