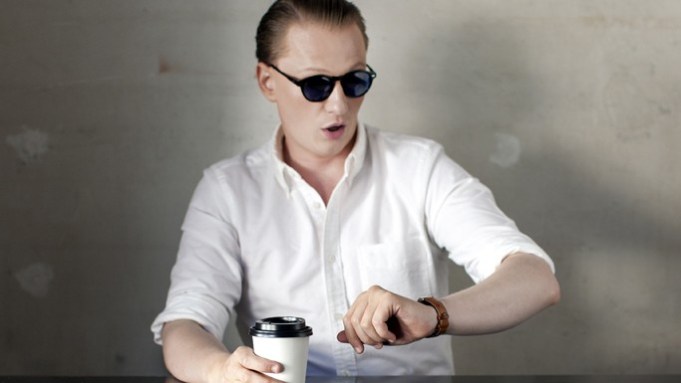 DOCKERS’ DO’S & DON’TS: Known for its casual ease, Dockers is possibly one of the last men’s brands you’d turn to for sartorial doctrine. Nonetheless, the kings of khaki tapped Jan-Henrik M. Scheper-Stuke, the poster boy and chief executive of more than 100 year old Berlin tie maker Edsor, to outline his 10 Rules of Style at Docker’s pop-up store in the boutique-filled Hackesche Markt area.

Scheper-Stuke, who takes style but not himself too seriously, was captured by photographer Rita Lino in 10 not always advantageous or indeed particularly easy to decipher poses. Seen strenuously pulling on lilac knee socks in one, for example, the message here is not against pastel hosiery, but rather that gentlemen “should wear socks to the knee, so that one cannot see the naked leg when wearing short pants” something Scheper-Stuck normally does. That little strip of pasty, hairy skin is a particularly gruesome sight on leg-crossed participants on political talk shows, he told WWD.

He also maintains that a man’s watch should not overwhelm his wrist, while too much jewelry in general is a no no (as visualized with him wearing gold tooth braces). A gentleman’s underwear should express a certain dignity — which translates into “No Garfield print boxers, please,” and in his view, short sleeved shirts should be restricted to the police and postal service. All others, roll up your shirt sleeves. Further gentlemanly admonitions: jogging suits are fit for sport only, not the streets; well-groomed hands are a must; invest in a few pairs of good shoes, and keep them polished; pay particular attention to proper sizing when buying your clothes, and try to keep your wardrobe and style in sync with your age.

And Dockers? Fit for a gentleman? Scheper-Stuck, whose taste runs in more Anglophile directions, admitted that prior to this project, he’d always thought Dockers were shoes. “But now I happily wear their chinos, and as a gentleman, or let’s say, given the way I dress, I can definitely find something in the range for me.” Everything he’s wearing in the photos are by Dockers, he pointed out, save the neckwear and slippers, which are by his own company Edsor. And his personal socks and boxer shorts.