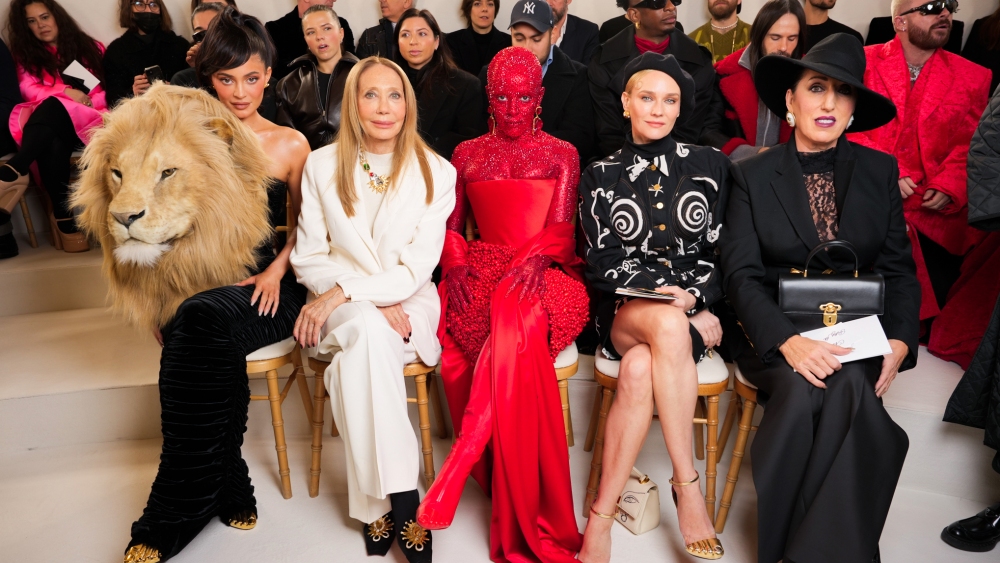 The buzz ahead of Monday morning’s Schiaparelli show was that she had been in makeup since 5 a.m., and that the look would be spectacular.

The she in question was Doja Cat, and when the rapper arrived she didn’t disappoint with 30,000 red Swarovski crystals that had been hand-applied covering her face, head and arms. Her dramatic entrance prompted wows through the crowd.

Doja Cat’s been upping the ante with eclectic makeup looks each season, and this intricate assembly matched the silk faille bustier, hand-knit skirr of lacquered wooden beads and trailing shawl from designer Daniel Roseberry for an eerie effect. It was an haute couture week opener that will be hard to top.

Kylie Jenner also stunned the crowd, entering wearing a full-fledged lion head attached to her velvet column. While Schiaparelli staff assured everyone it was fake, it was still a statement that shocked the normally nonplussed fashion crowd. It matched the collection that featured other endangered animal motifs, including a snow leopard dress.

Jenner chatted with Marisa Berenson, the granddaughter of Elsa Schiaparelli, in her front-row seat. The pair were just seats away from Diane Kruger, who showed up sporting a miniskirt on the chilly January morning.

“It’s like a very chic Fran Drescher,” she joked of her 1980s-inspired outfit.

Her latest film “Marlowe,” which will premiere in mid-February, is set in another iconic age. “The fashion is incredible,” she said of the 1930s-set thriller. But while she loved the more formal nature of the era, it’s best left on set. “It just takes so long to get ready. The hair alone is hours. But it’s just so wonderful because you are immediately in the character the minute you put the clothes on,” she said.

“Even the undergarments, they’re all original [for the film], because even the shapes for bras are very different than today, we kept it as original as possible and used vintage fabrics.”

Ruth Wilson also braved the cold for fashion in a midriff-bearing cropped wrap top and trousers. “The rest of the outfit is velvet so it’s actually quite toasty,” she said. It was one of four looks sent to her to select from. “And it was a great chance to wear a hat.”

The actress is in the midst of shooing “The Woman in the Wall” in Belfast, a story centered around the Magdalene Laundries, which forcibly housed so-called fallen women in the 1900s. The film has been turned into a gothic horror story, she said, talking business. “I’ve done quite a few recently, everything is a horror movie these days. Everything has to go through genre actually to be sold,” she said.

“It’s quite clever in a way, it’s a thriller and horror at the same time. It shines the light in a different way around the tragedies that did happen, and frames it in a different way to bring in an audience that wouldn’t usually go and watch a sort of very intense subject matter,” she said. That wraps at the end of February.

Her “Book of Ruth” project, set to costar Matt Bomer, is off the books. “That’s not happening, unfortunately. A great story, a wonderful story, but not happening.”

She’ll be announcing a stage production soon, but had to keep mum on the project for now. “I prefer theater to be honest, so I’m going back to my roots.”