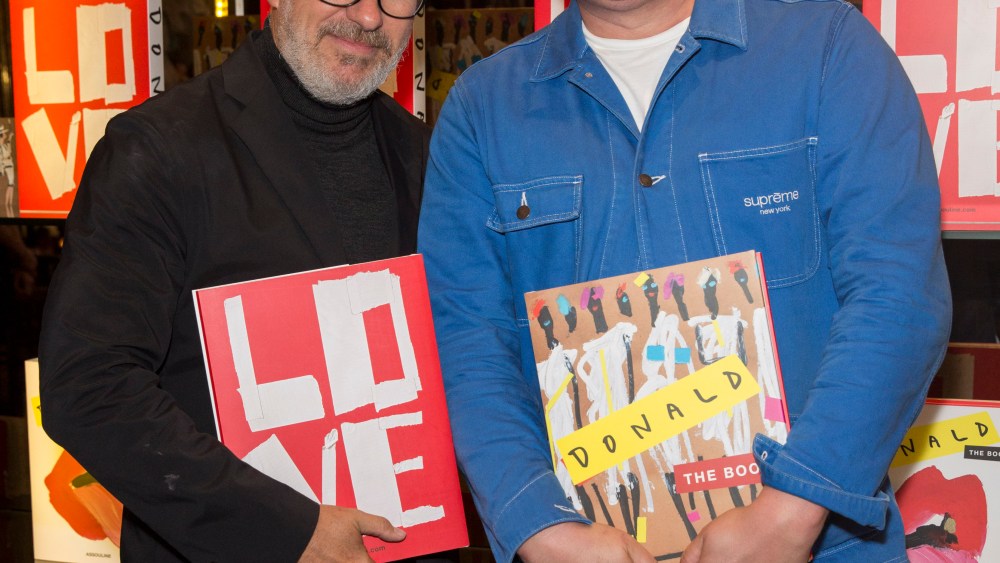 AMERICAN HUSTLE: “Somebody told me tonight that this book is just a very expensive business card,” joked Donald Robertson, signing copies of his book, “Donald — The Book,” at its launch at Maison Assouline on Piccadilly Street in London Friday night. “And it really is, it’s got all my stuff in it so I don’t even need to hustle [for work] so much anymore.”

Robertson — Estée Lauder’s creative director who is famous for his hand-painted handbags and his Instagram account @drawbertson, where he posts images of his fashion-centric artworks to over 190,000 followers — came to the book deal with Assouline through less-than-orthodox means.

“I was at Bergdorf’s, standing there painting on bags, and I was, like, ‘I want a book cover; I want a book [deal]. I’m just going to paint on the Valentino book.’ So I just started painting on the covers, put my name on it, but it said Valentino on the side, so I put the hashtag, ‘Kiss My Assouline.’ Totally without permission and I was selling them for about $2,800 on the shop floor.”

A phone call from Assouline founder Prosper Assouline followed. “I thought he was going to tell me to stop but he said, ‘Dude, let’s do a book’ and I said, ‘Right on.’ Then, Valentino [Garavani] called me and said he wanted the book I painted on and I said sure, I’d give him the book, but I would need quotes for my book.”

Upstairs in the private room, a dinner was arranged for guests including Giles Deacon, former model and Skiim founder and creative director Caroline Sciamma-Massenet, and interior designers Fran Hickman and Ashley Hicks.

The two long tables were covered with Robertson’s popular lip motifs, with matching seat covers and napkins in a playful scene set by glamorous event designer Fiona Leahy. “I have always been obsessed with Donald’s drawings, I love them, and I always tried to convince him to work on as many parties as possible — he did a menu for a Berluti party at Miami Art Basel and did an amazing lobster bib for something else,” she said. “But we only met for the first time in real life tonight and he said, ‘I can’t believe you bullied me into doing so many menus for you!’ But I was like, ‘This is my homage, a dinner for you, right?'”

The 300-page book, featuring a foreword by Estée Lauder Cos. executive group president John Demsey and some original work created especially for the title alongside the greatest hits, retails for $85.