The designer held a talk at the Times Center in New York on Wednesday as part of the promotional tour for her new book with Rizzoli. 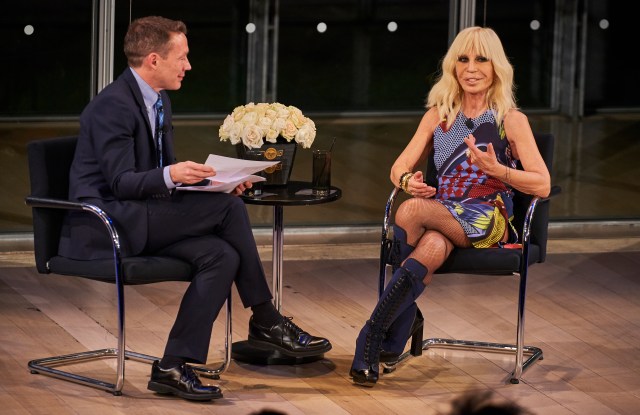 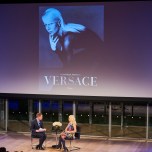 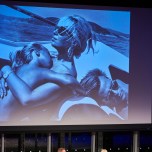 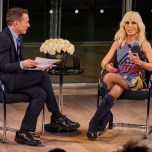 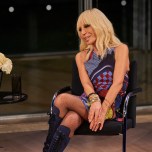 “Curious, self-effacing, delightful, surprising — a woman who keeps us on our toes all the time,” said Rizzoli’s publisher Charles Miers in his welcoming remarks for the woman of the hour, Donatella Versace, before she took the stage at the Times Center in New York on Wednesday evening as part of her promotional book tour for “Versace.”

“A siren, a role model for strong, fearless, powerful, breathtaking and awesome women — for the past 20 years, Donatella has expanded the vocabulary of fashion, from the classical universe…to the digital galaxy,” Miers continued. “I’m proud to say J.Lo and Lady Gaga both Instagrammed the book today…and in my world, that’s a big deal.”

The 30-minute talk, which drew a stylish crowd that packed into the auditorium — and included Helena Christensen, Leigh Lezark and Stephen Schwarzman — was moderated by Eric Wilson, InStyle’s fashion news director.

On Thursday, the designer will sign copies of the book at the Versace flagship on Fifth Avenue, with the last event slated for Dec. 15 at Milan’s Piccolo Teatro. Below, some highlights with the effusive and witty designer, who reflected on her career in a colorful minidress and knee-high boots:

On working with Richard Avedon:

Donatella Versace: “Richard was really difficult to work with, but he was a genius…I had a special relationship with him for a long time. I feel very fortunate.”

On Jennifer Lopez’s infamous green silk chiffon Versace dress at the Grammys in 2000:

On the difference between working on editorials and advertising campaigns:

D.V.: “Completely different. In editorial, I’m not in charge. Somebody is in charge of you. I like to be in charge.”

D.V.: “We took one hour to shoot. [People thought] it was revolutionary in the fashion community, but designers should help each other. We can learn from each other always.”

On Versace’s 2014 campaign starring Lady Gaga as a spitting image of Donatella:

On trends in the modeling industry:

D.V.: “After the [Nineties] supermodel moment, it went in the complete opposite [direction] — plain girls, no makeup. For me, it was sad. I couldn’t wait for the supermodels to come back…It’s always going back and forth. The [new generation of models] is gorgeous, strong, beautiful. They’re not afraid to show it…They’re not shy. I like that. They’re strong, in charge.”

On her sense of humor and willingness to play with her image [Wilson recalled an Instagram video Versace posted in which she poured a bucket of ice water on her head for the ALS “Ice Bucket Challenge” in 2014]:

D.V.: “People, sometimes, when they’re famous a little bit like me, they start being all untouchable. But I like to talk to people, I like to have a relationship with people. Instagram allows me to do that, to talk to the new generation…fans can see what’s behind [the brand]. I always like to see what’s going on, what’s new.”

On whether the campaign for Versace’s Dylan Blue fragrance, which depicted two men kissing, caused controversy: