Donatella Versace breezed into New York to kick off Art Unites, a special initiative the fashion house developed with the Whitney. 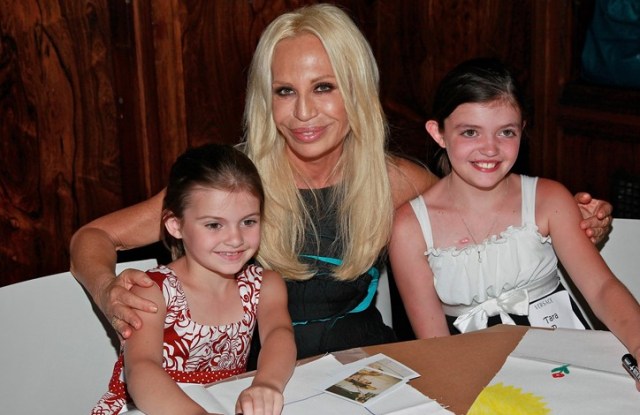 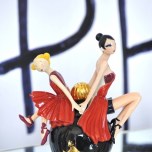 CREATIVE KIDS: When it comes to drawing, Donatella Versace has a piece of advice for children. “Don’t be afraid,” she said at the Whitney Museum of American Art on Wednesday. “Do what comes from your heart, don’t think too much, just be free and have fun.” Versace breezed into town this week to kick off Art Unites, a special initiative her fashion house developed with the museum, with an afternoon art party. There were two sessions of 15 children from the New York chapter of the Starlight Children’s Foundation on Wednesday. Versace and the museum’s director Adam D. Weinberg were on hand to help the children interpret the theme of friendship onto a canvas. “A picture is a way to say something that is inside of your heart or inside of your head, that you may not be able to put into words,” Weinberg said.

This story first appeared in the July 2, 2009 issue of WWD. Subscribe Today.

ITALIAN ACCENT: Adding a dose of Italian va-va-voom to Paris couture week, Roberto and Eva Cavalli are to host a press conference Monday about the new couture service at their recently opened Rue Saint-Honoré flagship, which boasts a couture salon. A sampling of looks from Cavalli’s debut couture line will be unveiled on models at the event.

A FAMILY AFFAIR: Lanvin has chosen a mother-daughter theme for its 120th anniversary line of hand-painted porcelain figurines in honor of founder Jeanne Lanvin, who was famous for her mother-and-daughter outfits. The limited edition collection, the third in an annual series of figurines, features seven Lanvin-clad mother-and-daughter characters in festive poses, such as a mother tying a red ribbon in her daughter’s hair. A range of anniversary Lanvin products will also hit stores at the end of November, including music boxes, paperweights, notebooks and embroidered T-shirts — all splattered with hearts and anniversary wishes. A repackaged version of the brand’s Arpege scent will also be released for the holiday season — not forgetting a honeymoon getaway suitcase filled with a Lanvin sarong, beach sandals and a white towel embroidered with the word “love.”

THE SKINNY: The Soho House is giving New Yorkers even more reason to hang out by the pool this summer with its new, weekly Wednesday night party “Skinny Dip.” Each event kicks off with a mini, poolside fashion show of summer looks from designers like Jill Stuart, Diane von Furstenberg and Matthew Williamson, followed by a live performance ranging from cabaret (Justin Bond) to Canadian rock (Carole Pope) and even a dose of opera (New York City Opera star Lauren Flanigan). The parties are open to members and their guests. And lest the name gives anyone the wrong idea, clothes are preferred.

BACK WITH A BANG: “I feel like a cat with nine lives,” said Jemima French at a party to relaunch her clothing label FrostFrench, held at her north London store. Frost, together with her fellow designer Sadie Frost, recently regained control of the label after it went through the U.K. equivalent of Chapter 11 last year, under its former management. Frost and French gathered a crowd including Ozwald Boateng, Pixie Geldof and James Brown to the store, which stands on a quaint cobbled street, to partake of raspberry martinis and frozen yogurt. “I love FrostFrench,” gushed a supportive Geldof. “Their designs are so womanly and sexy.” Later in the evening, French’s six-year-old daughter Meadow took a turn in the DJ booth, picking out tracks such as Abba’s “Dancing Queen” to play to the fashion crowd.