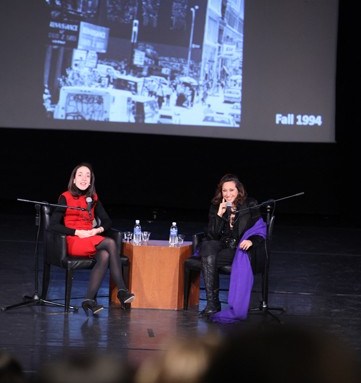 DONNA TALK: Donna Karan sure knows how to charm a crowd. On Monday, she took to the stage for the French Institute Alliance Française’s Fashion Talks series hosted by Pamela Golbin, curator in chief of 20th Century and Contemporary Fashion at the Musée de la Mode et du Textile in Paris. Karan discussed her early days at Anne Klein, the launch of Donna Karan New York, DKNY and, most recently, Urban Zen. She also told the audience at the jam-packed Florence Gould Hall that, in these times, “it’s about being conscious at shopping. We have a big responsibility in fashion.”

Karan also talked about everything from going public (“Not one of the highlights of my career,” she admitted. “For a minute, the stock was up”) to selling her business to LVMH Moët Hennessy Louis Vuitton (“It’s been an amazing experience”). Her favorite designers include Azzedine Alaïa, Yohji Yamamoto, Karl Lagerfeld and Rick Owens, and she would like to dress Tilda Swinton and Michelle Obama. Fashion Talks will continue next month with Catherine Malandrino on March 20 and Diane von Furstenberg on March 23.

FROM TV TO TOTES: Once again Christian Siriano is reaching the masses with his edgy designs — but this time Nielsen ratings won’t be a factor. The winner of season four of “Project Runway” has partnered with Payless ShoeSource on an accessories and footwear collection to make its debut at his show on Feb. 19 at The Salon at the tents at Bryant Park. The collection of clutches, totes and skyscraping heels ranges in price from $25 to $45 and is inspired by Egyptian artifacts with hieroglyphic details and all. “We started very high, very conceptual and very cool, and then made it wearable and marketable,” effused Siriano of his first accessories collection. “I wanted it to be hard and rock-esque.”

CARAT COUNTING: Alek Wek has teamed with De Beers to promote the company’s new diamond brand, Forevermark. The model and handbag designer has designed a one-off diamond necklace and brooch made from nearly 20,000 diamonds weighing 168 carats for the Forevermark Precious Collection, which was unveiled Tuesday in Hong Kong. Wek has dubbed the piece Rose Waterfalls and it’s a suite of three graduated diamond necklaces bearing rose motifs that can be worn together, with a diamond clasp or separately. “Stones are from the ground, so I wanted to choose nature as my theme — the necklace is inspired by roses, waterfalls, rocks and hills,” Wek said. “I wanted to make a piece that was realistic, something I could wear.” So far, the Forevermark collection has only launched in the Far East but will eventually make its debut in Europe and the U.S. as part of a worldwide rollout. Forevermark diamonds, according to De Beers, are ultrahigh-quality stones that are responsibly sourced, have benefited the local communities where they are mined and bear a unique identification number.