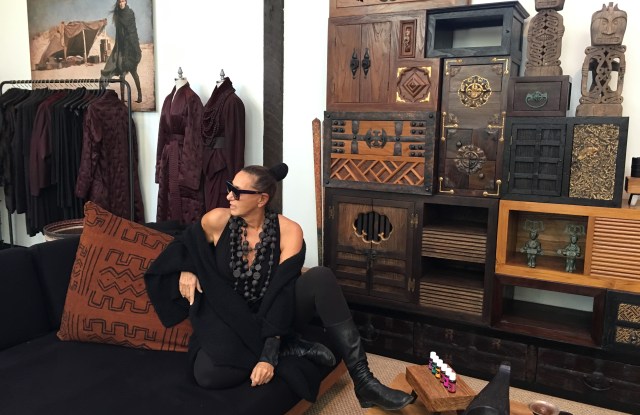 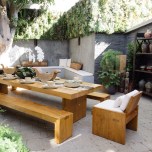 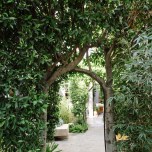 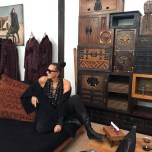 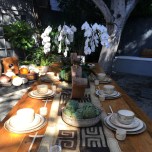 Donna Karan is spending a few weeks on the West Coast to settle into her fifth Urban Zen store, in West Hollywood. The 2,000-square-foot bungalow is the brand’s new permanent home, after a pop-up space off Robertson Boulevard closed in 2009. Karan had purchased the current property in 2011, with an eye on one day transforming it into a sprawling, residential-like complex for her lifestyle brand.

Upon entering through an ivy-covered archway, customers experience the first retail space, dubbed “the gallery,” which contains a mix of apparel, accessories, art and home objects. That leads to a flagstone courtyard garden filled with organic-style furniture and tabletop items made in Bali and Haiti. Off the courtyard is a great room which contains the bulk of the apparel collection and more seating areas. There’s also a working kitchen to make good use of the outdoor dining table.

“I don’t like to have too many people in here at once shopping, but I do want it to be a space where thought leaders can gather,” said Karan. “I like that it’s off the beaten path yet right in the middle of the city,” she said of the short, tree-lined street that’s home to a few other small businesses in Craftsman bungalows. In fact, Karan hopes to one day take over the entire block and transform it into an Urban Zen center like the one in New York.

As she pulled out a brochure she made 10 years ago, Karan points to the section about hotels and hospitality. “It’s my dream to one day have a hotel version of this,” she said. It’s also been a long-simmering dream of Karan’s to move to Malibu, but she said, “I can’t leave my grandchildren on the East Coast.”

Next week, she’ll head to Dallas to open up her Urban Zen boutique within the new Forty Five Ten store. Of selling her brand in other stores, she said, “I paused a bit when we got into Bergdorf’s. I wasn’t sure how the line would look outside this environment, but they really nailed it. I don’t think there’s anything else like it in the store.”

As for her wear-now collections and the rest of the fashion world now following suit, she laughed, “It’s like, ‘Hello?’ What took everyone so long?’ It’s sort of like the first woman presidential candidate.”