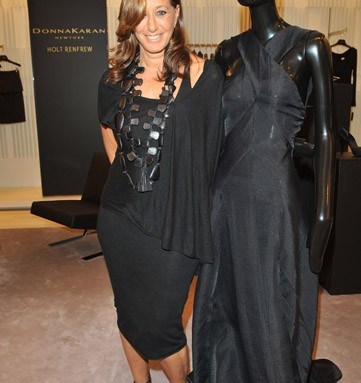 DONNA’S NIGHT OUT: Donna Karan’s distaste for the fashion calendar is well known, and she thinks Fashion’s Night Out could help solve the problem. “That’s when we should be launching,” Karan said, suggesting designers show their collections in multiple cities. “They could see the same show as Lincoln Center,” she said.

The designer came closer to that vision by staging runway events at Holt Renfrew in Toronto on Aug. 24, and at Neiman Marcus in Chicago last Friday. Karan said she would even be open to staging a show in Times Square on New Year’s Eve. “We could celebrate in season,” she said. “In this economy, why confuse the customer?”

WHO’S THE BOSS?: Designer Alexander Wang denied Monday he is beefing up management ranks at his fast-growing New York fashion house, squelching speculation he is zeroing in on a new chief executive. Sources said Wang has had his eye on Rodrigo Bazan, a Paris-based executive at Marc Jacobs International with purview over Europe and the Middle East. Bazan did not return phone calls.

FASHIONABLE LIVING: Many designers incorporate their fashion sensibility into their living quarters. The connection between the two will be on show at The Aldyn, a residential building at 60 Riverside Boulevard in New York. The Extell Development Co., which is behind the new property, teamed with eight CFDA members for a designer show house called “American Fashion: Designers at The Aldyn.” Diane von Furstenberg, Elie Tahari, Nicole Miller, Jeffrey Banks and Richard Lambertson and John Truex for Tiffany & Co. are among those who collaborated with interior designers to translate their newest collections for the home, often mixing in personal items.

The project, timed to the release of Assouline’s “American Fashion Designers at Home” with the CFDA, “is a great opportunity to showcase the talent of eight of the designers included in the book, but in a real setting,” CFDA executive director Steven Kolb said. The rooms will be unveiled at a Sept. 16 party and open to the public Sept. 21 to Dec. 10 with a $25 admission to benefit the CFDA Foundation.

PACO BELL: Some Space Age handbags could be in fashion’s future, with a Paco Rabanne bag line due to be presented during the coming fashion weeks. The details of the line and the city it will be presented in are yet to be determined, but the fashion comeback has been in the pipeline for the firm since the appointment in January 2009 of Vincent Thilloy as its vice president, overseeing its fragrance, fashion and accessories businesses. Thilloy at the time told WWD he thought the time was ripe for Paco Rabanne to expand its offerings, in part because the fragrance business has taken off exponentially. “I’m thinking about a new business model for the fashion,” he said. Owner Puig Beauty and Fashion Group in 2006 wound down the brand’s main ready-to-wear business, following a failed revival attempt under designer Patrick Robinson who joined the company in 2004.

OUT WEST: At a party in the Gap’s Marina District store across San Francisco from company headquarters, Lauren Bush and Ellen Gustafson launched their latest FEED Project, another tote bag, but this time with the goal of improving the quality of food served at U.S. schools. Bush and Gustafson, co-founders of FEED, were on hand to celebrate, as was Marka Hansen, president of Gap North America. They all remarked how quickly — 2.5 months — the tote, in three styles, came to be. “I love the idea of marrying design with philanthropy. Now FEED is taking the power of change down to the school level,” said Bush, who collaborated with Gap designer Patrick Robinson and was carrying the denim bucket style ($39.50) with the bold FEED logo in white applied with discharge printing.

“This project resonated with everyone,” said Hansen, as the honky tonk band Freight & Salvage Co. began warming up. With an initial production run of 28,000 totes, Gap will donate $5 of every sale to FEED for food-related projects selected by the online charity Donors Choose, which is already filling requests by teachers for all kinds of school needs. A range of food projects are expected to be funded, from buying industrial blenders to making smoothies to helping build a school garden or pay a visiting chef. While the bags (the two traditional canvas styles cost $29) won’t go on sale at Gaps across the U.S. until mid September, they’re now available at the Marina District store, as well as in Los Angeles at 1969 Robertson Boulevard and in New York at the White Space concept store, 680 Fifth Ave.

FROM THE MOUTHS OF…: When it comes to creating back-to-school merch, Vanilla Star Jeans president Mark Levy found the kids are definitely all right. He solicited ideas from a fashion-savvy group of them — incoming seniors at New York’s High School of Fashion Industries — for looks their peers would want to wear to start the 2010-11 school year. In the process, Levy hoped they would learn a few lessons about the realities of the fashion industry. “When you are designing, marketing and selling to the mass market, it has to be at a certain price point, and it has to be a look that is understandable in Iowa and Wisconsin as well as New York,” he told the students.” Levy was impressed by the outcomes, which he judged with Gretchen Davies, denim buyer for the retailer Wet Seal. “They did everything that was on the runways, and they interpreted it to retail for normal prices,” he said. Six winning styles, including a military jacket and olive twill harem pants, will be unveiled Sept 1. in the windows of Wet Seal’s Manhattan store on 14th Street. Twelve to 18 pieces of each style will also be available then for $18.50 to $32.50, and there’s a chance one or two styles that sell well will be produced for the entire Wet Seal chain of around 500 stores.