Channeling his two passions at once, Diego Della Valle premiered both a short film and the new Tod’s Signature accessories collection at an event in Shanghai. 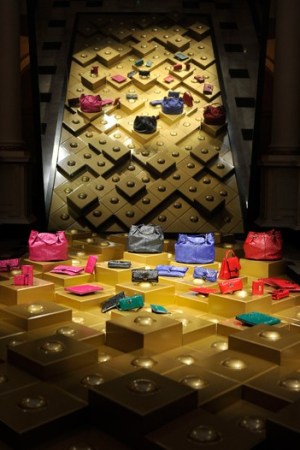 DOUBLE DUTY: Channeling his two passions in one event, Tod’s Group’s Diego Della Valle premiered both the short film “Red Touch, Dancing a Dream” and the new Tod’s Signature accessories collection at an event in Shanghai on Wednesday night.

The new line of bags and small leather goods is crafted from leather imprinted with a diamond-and-circles motif that resembles the famous “gommino” or pebble sole, Tod’s’ most characterizing detail. The fall launch collection spans an array of top handle bags, both soft and structured; clutches, and wallets in bright tones, including royal blue and fuchsia pink, alongside black and gray. It will hit Tod’s flagships in September.

As for the film, “Red Touch, Dancing a Dream” follows on from the success of “An Italian Dream,” a ballet-centric movie, for which Della Valle partnered with Milan’s storied Teatro alla Scala. The new, five-minute movie, directed by Marco Gentile, tells of two young girls who dream to fulfil their different lifetime ambitions, one to become a ballerina and the other to become an accessories maker. It stars renowned Chinese ballet dancer Honglan Hou, who performed for the guests in Shanghai, choreographed by Teatro alla Scala’s Gianluca Schiavoni.

MEMBERS ONLY: An international cast of designers and labels — Azzaro, Carven, Damir Doma, Felipe Oliveira Baptista, Thimister, Véronique Leroy and Zac Posen — have been elected as members or associate members of the Chambre Syndicale. In 2009, Rochas, Roland Mouret, Shiatzy Chen and Vanessa Bruno were named as part of the Chambre Syndicale, which now counts almost 100 houses in total.