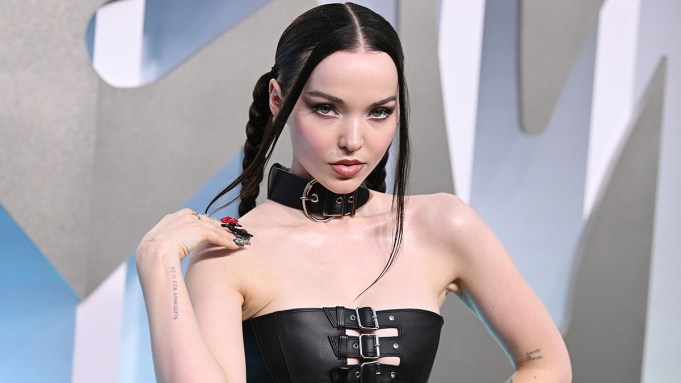 Dove Cameron had a standout gothic moment on the red carpet at the MTV Video Music Awards on Sunday in Newark, N.J. The actress-singer donned a black sleeveless gown featuring a Paco Rabanne floral-print skirt and two belts, one around her bust and another accentuating her waist. Cameron paired the spring 2023 look with open-toe black heels. She accessorized with a choker necklace that emphasized the outfit’s bondage themes.

Dove was styled by Marta Del Rio, who has worked with Gwen Stefani, Coi Leray and Billie Eilish.

The musician styled her dark brown hair in braided pigtails and had a bold makeup look that included a dark smoky eye and a dark mauve lip.

Cameron performed for the first time at the VMAs during the pre-show along with Saucy Santana and Yung Gravy. The singer brought her hit “Boyfriend” to the stage, choosing to wear a dark metallic bralette with silk high-waisted pants, a blazer and black stilettos. Her hair was pulled back into a high ponytail with two pieces left out in the front.

The musician released her newest single, “Breakfast,” and its music video on Aug. 23, which served as a meaningful tribute to the results of the Roe v. Wade case being overturned recently.