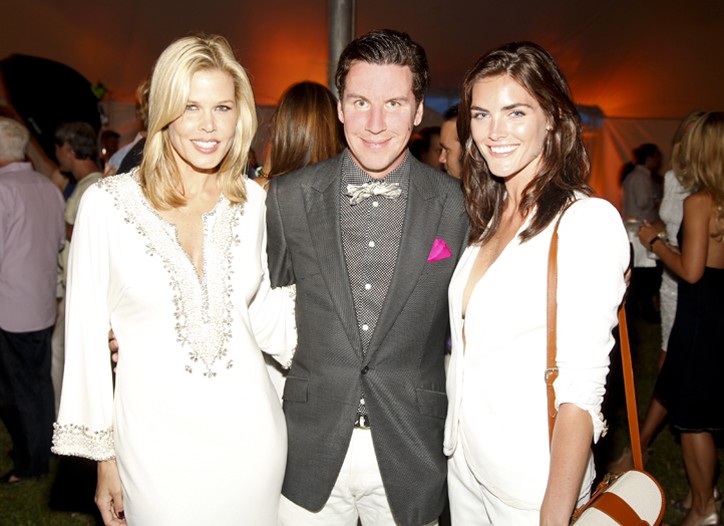 DOWN AND OUT — AND ABOUT: Real Housewife of New York Sonja Morgan isn’t letting her well-publicized financial woes keep her off the Hamptons party circuit. The bankrupt, blonde divorcée hit the Empire State Pride Agenda tea dance benefit, the Parrish Art Museum gala and Love Heals at Luna Farm, all on Saturday. “At the end of the day, you have your friends, your family and your fashion,” said Morgan of her televised money meltdown. “I bought this dress at Intermix and it was half off, with another 40 percent off, so basically it was free.”

“I got asked out by a 24-year-old. I told him my son could use an older brother,” said a bemused Stephenson, who’s juggling a slew of fashion projects. On her plate currently: an E reality show that will begin tailing her next month; a style ambassador gig for the new Amazon shopping site Myhabit.com; a fashion project for Guy Oseary’s Rockpaperphoto.com, which sells fine art photography online, and consulting on the upcoming launch of a women’s fashion line from Ariana Rockefeller.

WELLS FARGO…MATCHMAKER?: She was hardly the first to raise the possibility, but Wells Fargo Securities analyst Evren Kopelman played matchmaker Monday in a research note on what a PVH Corp./The Warnaco Group Inc. marriage might look like.

Think $9.3 billion in sales for the combined company and $1.4 billion in EBITDA in 2013 for an acquisition in mid-2012, making it the second largest apparel firm after VF Corp., which just grew larger with its planned $2.2 billion acquisition of Timberland.

Warnaco has long been speculated as a possible target of PVH, Calvin Klein’s owner, since it holds the license for Calvin Klein jeans and owns the Klein underwear business.

Presuming that Polo Ralph Lauren Corp. would take back the Chaps license under a change in control provision, the Wells Fargo analyst pegged an EBITDA multiple of 8.8 times, or a $3 billion deal at $70 a share, for Warnaco.

When PVH acquired Tommy Hilfiger last year, one attraction was its European platform. The analyst reasoned that Warnaco would be attractive because of its business in Asia and Latin America, where PVH has less exposure.

Peek & Cloppenburg-sponsored Designer for Tomorrow brought in Marc Jacobs as patron and jury president for this year’s competition. The winner, Alexandra Kiesel, a graduate of Berlin’s Weissensee School of Art, showed modular color-blocked separates with power shoulders. She gets a long-term sponsorship program at the German specialty store chain and a runway show in Berlin next January.

Another Weissensee graduate, Hoai Huong Vo Ngoc, was crowned with the top 10,000-euro prize for innovation in fashion by the Confederation of the German Textile and Fashion Industry for her Berlin-based label Concis’ refined, draped looks. Second prize went to Sabina Taschen’s Ame Soeur label and third prize to Antje Pugnat for her knit collection.

French-German duo Augustin Teboul took home the gold in the Start Your Fashion Business competition, sponsored by Berlin’s Senate. The panel of experts united hands-down for the designing pair’s provocative but carefully hand-worked collection of all-black shredded and sheer looks.

LIFE IS A CABARET: It was red lights and pink Champagne in the afternoon for Fifi Chachnil and friends on Monday for a presentation of the designer’s spring collection at the Crazy Horse in Paris, modeled by the cabaret’s dance troupe. Highlights included printed rompers, Fifties-style polka-dot frocks and signature retro frilly panties. Seated next to photographers Pierre et Gilles, designer Vincent Darré said he’s been busy working on the interior of the latest Le Baron club, which is due to open in New York’s Chinatown district in September. “The look will be 1950s Chinese brothel,” he said.

French pop star Slimy, also in the audience, was mulling what he’s going to wear for his next concert at Paris’ Maison de l’Architecture architecture museum on July 22. “The site used to be a monastery, so I think I’m going to take inspiration from that,” he mused. “I have this scoop-necked neoprene top that looks part diver, part monk.” Chachnil, who recently released a five-song CD, “Mademoiselle Fifi,” performed the final act of the show, meanwhile, hopping onto a swing on stage to deliver a song titled “Noctambule.”

TOURNEAU TO LAUNCH TNY SERIES: Tourneau will launch 12 signature timepieces in September — the first time in two years the company is introducing a series of its own designs. The TNY Collection, which will be available at the retailer’s 39 locations nationwide and range in price from $1,100 to $9,400, were designed by Marco Borraccino and produced in Switzerland. Offerings are available in three sizes — including a hand-winding style, a chronograph and a GMT — and are comprised of materials such as rose gold, titanium, stainless steel and a diamond-like carbon.

LOHAN OUT OF COURT: Lindsay Lohan’s luck might be changing. A Florida federal judge on Thursday dismissed a contract and trade secrets case, in which Lohan was named as defendant. The news came a week after the troubled star completed her 35-day house arrest.

The original complaint claimed that Lohan developed the bronzer with her business partner Lorit Simon, who, after obtaining samples of the plaintiff’s tanner, had allegedly developed a “nearly identical” formula. Aside from the lack of personal jurisdiction, the court added that because Lohan only has indirect ownership in Lorit LLC, the company responsible for creating the tanning spray, she is not liable for any breach of contract.

POWER SHOPPING: Kimberly Ovitz, Christian Siriano, Gilt Groupe’s Alexis Macy Maybank, Refinery 29’s Philippe Von Borries and Rent The Runway’s Jennifer Fleiss will be on Capitol Hill Wednesday at an all-day event to help kick off Buy Young, an initiative aimed at encouraging Americans to support business started by people under the age of 30. Barry Diller will be the keynote speaker at the luncheon, which will be hosted by House Minority Whip Steny Hoyer. John McCain and Kirsten Gillibrand are also expected to be on hand to support Buy Young, a campaign that has been organized by the nonprofit Our Time.