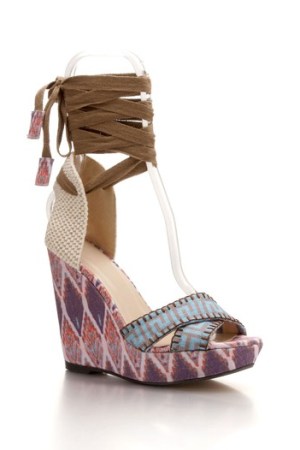 DOWNING [HEARTS] T&C: With such an affinity for Theodora & Callum, you’d think Ken Downing was the brand’s godfather. The Neiman Marcus Group senior vice president and fashion director was one of the first to champion the line when it launched in the spring at Bergdorf Goodman and Neiman Marcus. He has bigger plans for the brand now, including exclusive products, prominent placement in Neiman’s catalogue and dedicated e-mails.

Created by Stefani Greenfield and Desiree Gruber, Theodora & Callum recently previewed its resort offerings, where Downing waxed enthusiastic about the brand. “Ken is very collaborative,” Greenfield said. “He gives constructive criticism. For our events, Ken created something like a shop-in-shop and promoted the full range of Theodora & Callum products,” said Greenfield, who attended five of Neiman’s 15 fashion shows for the brand.

CROWN SHADES: Making inroads in a new niche market, Bulgari and Luxottica in the fall will launch a line of jewelry eyewear called Le Gemme. The sunglasses and prescription frames are made with 18-karat gold and adorned with precious stones such as sapphires and diamonds. The project also features 10 one-of-a-kind glasses called Le Gemme Rare, which take four months to make.

NOW HIRING: Giorgio Armani’s second hotel is scheduled to open in Milan in the fall, under an agreement with Dubai-based developer Emaar Properties, which said on Monday it is recruiting 180 hospitality professionals for the project. The hotel, located above Armani’s Manzoni 31 megastore and a few steps away from the city’s exclusive Via Montenapoleone shopping street, will comprise 95 rooms and suites, restaurants and lounges, a spa and a business center designed by Armani. The Milan location follows the opening in April 2010 of the first Armani hotel and apartments in Dubai, in the emirate’s soaring Burj Khalifa tower.

BLUE PERIOD: Denim maker Siwy has recruited three artists — Shelter Serra, Francesca DiMattio and John Gauld — to create limited edition jeans that will go on sale next month on siwydenim.com and shopgreyarea.com. The project was part of a talk at The Wooly on collecting art for beginners co-sponsored by Siwy and organized by The Society, a members-only club that curates cultural events. Panelists included Kyle DeWoody, Monica Schwerin, Philae Knight and Max Wolf, who also selected the artists to create the Siwy designs.

“I was happy to be asked to speak about something other than fashion,” noted Lauren Santo Domingo, co-founder and creative director of the new designer e-tail site Moda Operandi, who moderated the discussion. On hand were designers Prabal Gurung, Timo Weiland, Laura Poretsky, Ruffian’s Brian Wolk and Claude Morais along with Amy Greenspon and Bettina Prentice.

RENAISSANCE WOMAN: Belgian designer Veronique Branquinho has teamed with luxury lingerie designer Marie Jo L’Aventure for a capsule collection of luxury underwear. Satin and silk corsets have been printed with images of Eve and Venus inspired by Renaissance masters Raphael and Durer. The collection will be launched in September and prices start from 250 euros, or $356 at current exchange.

BOOT CAMP: Antoine Arnault went public Wednesday night with what he allowed was one of fashion’s worst kept secrets, hosting a dinner at La Stresa to introduce Alessandro Sartori as Berluti’s new artistic director. The former Z Zegna designer sat at the hub of the tiny Italian eatery, and said his ambition is to make Berluti, founded in 1895, “the best couture men’s wear brand in the world.”

Berluti president Pietro Beccari, who is also Louis Vuitton’s executive vice president, likened Sartori’s arrival to that of Marc Jacobs at Vuitton in 1998. Beccari said his debut collection would be presented next January, with some teaser items arriving in stores in November. The plan is to extend the brand with ready-to-wear, along with more leather goods and accessories.

EURO VISION: Marc Jacobs men’s wear is inching towards the runway — and the label is stepping up its women’s collections’ European presence. The American firm opened a new European press showroom for its women’s clothing and accessories lines above its picturesque Palais Royal collection store in Paris. “It was something that was meant to be,” Robert Duffy, president of Marc Jacobs, said of the cozy space that overlooks the Palais Royal’s tree-lined gardens. “We had more and more [European] stores that buy our collection and more and more stores that buy Marc by Marc…so I just thought it was time that Europe had a press office,” he said.

Meanwhile, Duffy said he’s looking at opening stores in Germany, Amsterdam, India and Australia, and scouting for a space for a Marc Jacobs Collection store in Milan. He admitted that Jacobs’ men’s business “was sort of the step-child for a while. This season was the most put-together we have been for a long time. And I think we’re ready to show it,” said Duffy, noting he’s still finalizing when he plans to show the line.