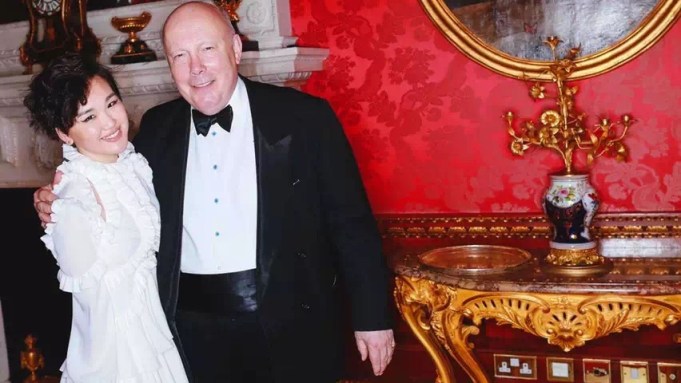 FOREIGN POLICY: Members of the cast of “Downton Abbey” revisited one of the last locations where the period drama was shot — the Ritz Hotel on London’s Piccadilly — for a dinner this week aimed at promoting British culture abroad.

Lord Julian Fellowes, Phyllis Logan and the series’ director Liz Trubridge were among the dinner guests at the hotel’s Music Room, which was filled with props and costumes from the series.

Trubridge reminisced about the beginnings of the period drama: “We set out to do a trilogy that would take place before, during and after the First World War, because there was so much social change at the time. However, we didn’t know if there would be a continuation after the first season, all we could do was work hard and create something we are proud of. We were also aware that if we were not successful there wouldn’t be many period dramas for a while.”

The series’ global success — particularly in America and China — came as a surprise, according to Fellowes. “When Americans love you, they love you fiercely,” he said, remembering a recent trip to New York where a fan followed him into a Barnes & Noble store and begged him to keep the character of Edith happy. “As for the response from China, it was rather shocking, we have 600 million followers. If we are entertained by the same things, we can’t be that different.”

Among the other guests were Chinese bloggers taking part in the showcase of British luxury brands, which also included Vertu, Chivas Regal, Nyetimber and Astley Clarke.

Trubridge said she treasures the award that “Downton” scooped at the Shanghai TV Festival. “This kind of international exposure created so many opportunities for us. Designers and jewelers started offering the most exquisite pieces for Lady Mary (actress Michelle Dockery) to wear, with security sometimes sitting next door waiting for the shoot to finish, so that it could be returned. Not to mention our amazement when Ralph Lauren presented a collection inspired by the series’ country attire with models walking down the catwalk to a ‘Downton Abbey’-themed tune.”

Fellowes said he only had to voice his views a few times regarding the costumes. “Sometimes the costume designers would shy away from traditional clothing, but this is what men used to wear at the time. So if I saw a blue tweed suit, for instance, I would say ‘Absolutely not.'”