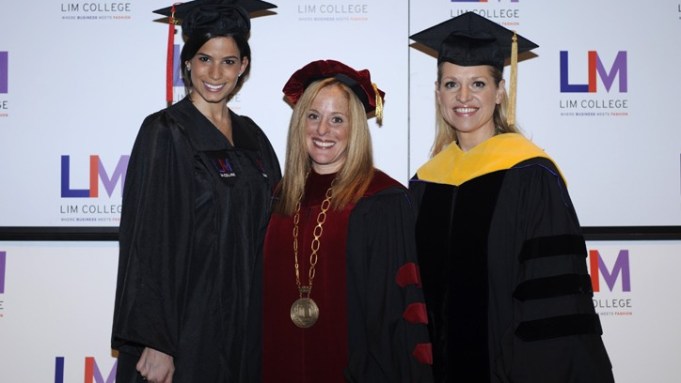 DR. GROSSMAN: Mindy Grossman, chief executive officer of HSN, on Thursday received an honorary degree from LIM College in Manhattan. Grossman, who got involved with the school at the behest of president Liz Marcuse, said the college’s “focus, intimacy, collaborative nature and access to internships is what makes it unique.” A self-described risk taker, she told students the rewards of taking risks will be “that much greater than if you never had the courage to make bold moves.” Grossman, who received LIM’s Distinguished Achievement Award and an honorary Doctor of Commercial Science degree at the ceremony, told of committing career suicide more than once. She said industry eyebrows were raised when she left Polo Jeans in 2000 to work at Nike, and again in 2006 when she joined Barry Diller’s IAC, which included the HSN business. Grossman prevailed and continued to mentor women. Speaking to a student audience made up mostly of women, she wondered aloud why only 15 percent of corporate officers and only 5 percent of the Fortune 500 ceo’s are women. “As women, we can have it all, we just can’t have it all at the same time,” she said. Always the consummate saleswoman, Grossman implored the graduates to “always celebrate success with a great pair of shoes. It’s time for all of you to go shopping.” (Preferably on HSN.)

DONNA’S GUEST: Cornelia Guest, the New York social and burgeoning caterer, can now add ambassador to her résumé. She is one of several women to participate in the Donna Karan Ambassador program, which the designer just created to celebrate women who embody her values and, like her, have made it a mission to give back to their communities. Donna Karan International teamed up with its key retailers to determine these ambassadors in their cities. The list of women is still growing, but so far it also includes Margaret Muir, Dana Agamalian, Simone Lutgert, Sheridan Williams, Christine VanDeVelde Luskin and Diana MacFarlane.

HERO WORSHIP: Celebrating the 75th anniversary of DC Comics, Colette in Paris has commissioned a range of superhero-themed designer accessories and clothing items for its latest window, due to be unveiled on Monday. The kooky limited edition designs include a Dog Batman T-shirt by Lanvin men’s wear designer Lucas Ossendrijver; whiskered Catwoman thigh boots by Roger Vivier; a Green Lantern glove by Karl Lagerfeld, and Plastic Man shades by Thierry Lasry.

HAVING A BALL: Susan Casden and Cameron Silver, members of Los Angeles’ Friends of the Costume Institute contingent, hosted their second annual dinner to honor Met curator Andrew Bolton on Wednesday at Jose Andres’ Bazaar. “I’m just here as a plus-one,” said Harold Koda, who reunited with pal Eva Chow after 17 years. “You look exactly the same, only with less hair,” she told him. Rodarte’s Laura and Kate Mulleavy, James Galanos, Juan Carlos Obando, Monique Lhuillier and Liv Ballard were among the L.A. designers in the mix, as well as Peggy Moffitt, Jennifer Morrison and Colleen Bell. Bolton remained tight-lipped about the theme for next year’s exhibit, but Koda said, “It involves a lot of drunk Brits. You’ll want to wear something that you can lift your arms in, maybe show some cleavage.”

AZZARO’S NEW HORIZONS: Following the success of its pop-up shop in London, which has since become a permanent store, Azzaro is hoping to create a similar buzz in the Middle East with a temporary boutique in Riyadh, Saudi Arabia. The French fashion house has partnered with the new luxury lifestyle concept store Maison Bo-M at the Nujoud Mall. The Azzaro corner on the shop’s first floor stocks the brand’s fall collection and accessories including the iconic Paola bag. The boutique opened May 19 and will close July 31.

DANCE WITH THE STARS: Attendees at Thursday’s amfAR Inspiration Gala at the New York Public Library will have the opportunity to bid on dates with two of the pop icons on hand. Barneys New York’s Simon Doonan will conduct an auction for an evening with host Kylie Minogue at a Rufus Wainwright concert in the Hamptons in August, as well as a meet-and-greet with honoree Ricky Martin at his next New York concert. MAC Viva Glam spokesperson Cyndi Lauper will perform at the gala, Jean Paul Gaultier will be honored along with Martin, and Estelle will DJ a runway show featuring men’s looks from a who’s who of top design names, including Ralph Lauren, Tom Ford, Prada, Yves Saint Laurent, Marc Jacobs and Dolce & Gabbana. All of the outfits will be up for auction to raise funds for the AIDS organization.

COSTUME DRAMA: Oscar-winning costume designer Colleen Atwood was on hand for an “Alice in Wonderland” fashion show at Los Angeles’ Fashion Institute of Design and Merchandising Wednesday night, which also marked the opening of the billion-dollar-grossing film’s costume exhibit at FIDM Gallery and its home-video release. Channeling the White Queen in a Jil Sander suit, Atwood said she wasted no time getting back to work after collaborating with Tim Burton. She teamed up with Mad Hatter Johnny Depp twice more for the Sixties period piece “The Rum Diaries,” based on a Hunter S. Thompson novel, and “The Tourist,” which also stars Angelina Jolie. “It’s a contemporary thriller, something different for me, but we did an homage to the Hitchcock era,” Atwood said.

HOT AND COLD: Burlesque performer Dita Von Teese continues to seduce the French — and not just her beau, Louis-Marie de Castelbajac. First there was her collaboration with Cointreau on a signature cocktail, the Cointreau Teese, made with the orange-flavored liquor, apple and lemon juice, and violet syrup. That inspired pastry chef Sébastien Bauer of famous Parisian tearoom Angelina to whip up a new macaroon using similar flavors, available this summer. Her newest collaboration may be tamer, but it is no less stylish. Perrier will feature portraits of Von Teese rendered in black and silver on their entire range of products. Called Paparazzi, the limited edition products will go on sale in June.

DESIGN FOR LIVING: After designing silver spoons for Christofle and a perfume bottle for Guerlain, Ora-Ito has moved on to sofas. The French industrial designer has produced five models for Dunlopillo, available exclusively at Conforama, the furniture chain owned by retail-to-luxury group PPR. With names like Mid’Night and Curling, the sofas come in shades of gray and black shot with neon colors and are priced from 140 euros to 990 euros, or $170 to $1,200. “Conforama aims to make design accessible to everyone,” said the firm’s chief executive officer Thierry Guibert.