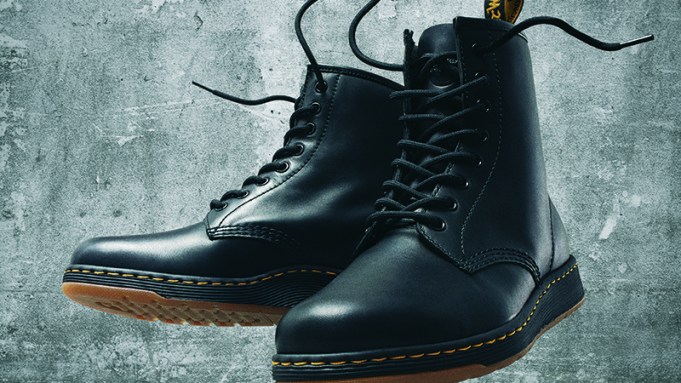 Dr. Martens is tripping the light fantastic. The workwear born, subculture-loved and fashion-embraced heavy shoes have received a slim-down that’s being called its biggest revolution since the Sixties launch of the AirWare sole.

The new line, DM’s Lite, hits stores globally on Thursday, and is being celebrated with events around Europe and beyond. In Berlin, up-and-coming German band Milliarden rocked a crowd at the Boots & Shoes store in the city’s Hackescher Markt shopping area.

DM’s Lite’s opening gambit consists of five unisex models. Three are based on classic Dr. Martens designs and are named for notable scientists and inventors — Cavendish, Newton and Edison. The eight-eyelet boot, lace-up shoe and slip-on tassel loafer come in black and cherry red with black and tan soles. Additionally, there are two new athletic-look styles with white soles —  a sneaker in black and brown, and a sneaker boot in five colors. U.S. prices for the line start at $105 and go up to $135. More DM’s Lite styles will be released for spring 2017.

These next-generation Docs are the direct result of customer demand, explained Sébastien Berre of Dr. Martens EMEA marketing division, who came from London to Berlin for Thursday’s launch event.

“A lot of people we’ve talked to about the shoes say they’re too bulky, too chunky, too heavy. So this is our response, and we’re hoping that we are offering something that customers are looking for,” Berre said. “We’re also trying to answer the needs of that new generation that are used to all the different sneaker products.”

It’s a generation accustomed to lightweight, flexible, comfortable footwear that’s ready to wear and doesn’t have to be broken in, one common lament about Dr. Martens’ sometimes stiff shoes.

In some regions, the launch of DM’s Lite has already cut through and broadened that market, said Kristin Staeren, Dr Martens brand manager for Germany, Austria, and Switzerland.

“In Germany, we’ve added the sneaker accounts. There are some very good and big accounts more in the sneaker and skate area. They’ve tried this before. They say, ‘We like the 1460 [eight-eye boot], we think it’s really cool, but then it came and it was a strange item in between all the sneakers.’ So this could be an opening in this direction.”

And although Dr. Martens already have many doors in the country, from department stores Galeries Lafayette Berlin and KaDeWe to concept stores Soto and Voo, and countless tiny  independent shops, the brand has no of its own stores in Germany. That may soon change. In addition to innovations, the company has placed a focus on store expansion since its 2014 takeover by Permira. Last month two stores opened in the Netherlands, in Utrecht and Rotterdam. Other recent openings have been in Asia and the U.S.