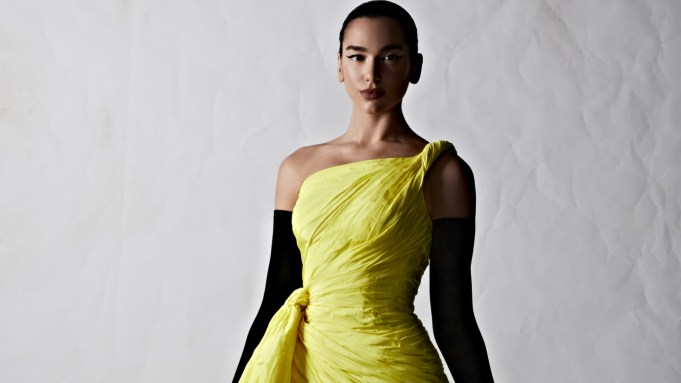 Dua Lipa has hit the runway once more, this time with Balenciaga.

On Wednesday, the singer was one of the many A-list celebrities tapped to walk in Demna’s second couture show for the luxury fashion house in Paris. Lipa wore a one-shoulder, bright yellow minidress that was complemented with a lengthy train on one side. Her hair was up in a bun and she wore black tights and long black gloves that almost reached her shoulders.

The Balenciaga couture runway was just as star-studded as its front row, which saw guests including Kris Jenner and her granddaughter North West, Alexa Demie, Offset and more.

At that show, the first look was a black blazer dress with a cutout design, featuring safety pins in different colors along the right side of the skirt. The second was a hot pink glittering two-piece set with a cropped tank top and midi skirt with a high-thigh slit. Her hair was styled straight with long extensions and her eye makeup was blue and green topped with a nude lip.

Lipa walked out again to join Donatella Versace, the label’s artistic director, for her final bow at the end, cementing herself as one of the brand’s muses.