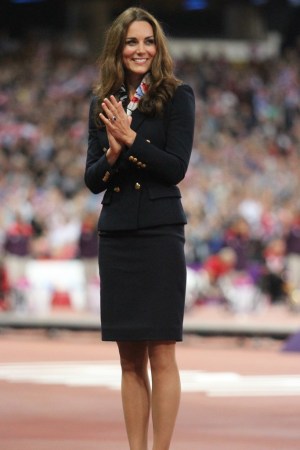 MEDAL MOMENT: The Duchess of Cambridge isn’t just hanging back as a spectator at London’s Paralympic games. On Sunday, the royal presented a gold medal to Aled Davies, the British athlete who won the discus event.

The duchess wore a navy blazer and pencil skirt, accessorized with a Team GB scarf and wedge heels, to present the medal at Sunday night’s ceremony. Earlier that day, she had taken in the Paralympic rowing finals, together with Sophie, Countess of Wessex, and Lady Louise Windsor.

The duchess watched the event, held on a rainy morning in Eton Dorney, Berkshire, wearing a Team GB anorak, skinny jeans and sneakers. The royals also witnessed a win for the British team at that event, the mixed coxed four, while Germany came in second and the Ukraine won third place.