She donned a blue-gray Michael Kors coat that she first wore during her royal tour to Australia in 2014.

By Lorelei Marfil on May 4, 2016
View Slideshow 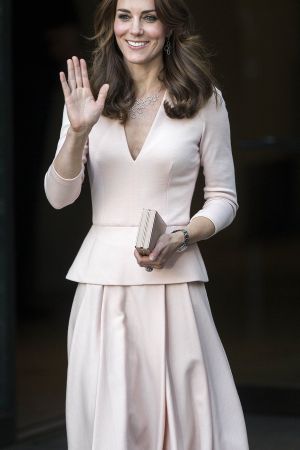 DUCHESS ON DUTY: Following a tour of India and Bhutan, Queen Elizabeth’s 90th birthday festivities and a visit from President Obama and First Lady Michelle Obama, the Duchess of Cambridge is carrying on with a series of royal engagements. She headed to Hampton Court to open Magic Garden, a new children’s play area, on Wednesday.

Designed by Robert Meyers with a moat and shrub maze, the garden is located in King Henry VIII’s former courtyard where, historically, jousting and tournaments took place. The duchess met with the teams involved in the design and construction, as well as children and families in the community. She attended a reception and unveiled a plaque to mark the opening. No stranger to recycling her wardrobe, she donned a blue-gray Michael Kors coat first seen during her royal tour to Australia in 2014 with LK Bennett heels.

As a patron of the Anna Freud Centre, she attended a lunch in a Roksanda Illincic dress and met with families from the center and supporters of the institution that increases awareness of children’s mental health issues. She headed to the National Portrait Gallery wearing a pink peplum Alexander McQueen dress with Monica Vinader jewelry to view two portraits of her by photographer Josh Olins that are on display as a part of the “Vogue 100: A Century of Style” exhibition.

It has been an eventful weekend for the royal, who celebrated Princess Charlotte’s first birthday and released images of her daughter. It was also announced that she will appear on the cover of the June issue of British Vogue, with the portraits shot by Olins.