The Future of Ulta

BACK IN BURGUNDY: The Duchess of Cambridge took a solo trip to Wales on Wednesday as part of her efforts to raise awareness around mental health issues, especially in children.

In December she became a patron of Action for Children, taking over from Queen Elizabeth II at the charity that aids disadvantaged children. The duchess traveled to Torfaen to meet with members of MIST, a child and teen mental health initiative that works with troubled children, and learned about their work for the program. She took in a game of pool with teenagers involved with the project.

She also paid a visit to Caerphilly Family Intervention Team and met with staff that support children with behavioral and emotional disabilities. She observed a family therapy session and sat in a roundtable discussion to learn about the issues that affect kids and families at the center.

Kate Middleton wore a burgundy skirt suit by Paule Ka. This is the second occasion she has worn the suit.  She wore it in 2012 for an event at Middle Temple, where she and Prince William met with law students. 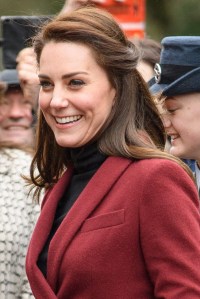 Last week, she visited the air force base RAF Wittering in Cambridgeshire, England, and met with air cadets from the Bedfordshire and Cambridgeshire Wing Air Training Corps. A royal patron and honorary air commandant of the RAF Air Cadets, the young royal climbed into the cockpit of a training aircraft and flew with a flight simulator. She also took part in a development training session and joined a team-building exercise. The duchess took over her role with the RAF Air Cadets from the Duke of Edinburgh last December.

RELATED STORY: Duchess of Cambridge Takes a Virtual Flight at RAF Wittering Base in Cambridgeshire, England >>