As royal patron of East Anglia’s Children’s Hospices, she launched the organization’s new facility in Ipswich. 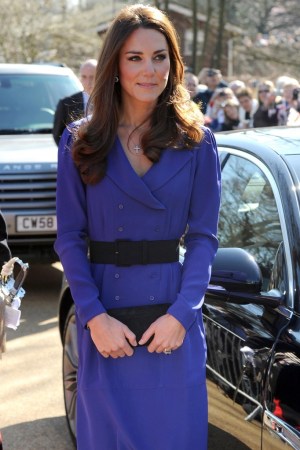 DUCHESS ON DUTY: The Duchess of Cambridge delivered the first public speech of her royal career on Monday — and admitted later that she found it “nerve-wracking.” The duchess, royal patron of East Anglia’s Children’s Hospices, launched the organization’s new facility in Ipswich, known as the Treehouse. She donned a bright blue, double-breasted Reiss coat dress cinched at the waist with a black belt. She sounded “a little apprehensive,” according to Britain’s Press Association, but delivered the speech without stumbling. She visited the facilities, met children and their families and planted a commemorative tree in the Treehouse grounds. During the reception that followed the visit, she told a guest: “I find doing speeches nerve-wracking.”

It’s been a busy few days for the duchess, who over the weekend presented traditional sprigs of shamrock to The Irish Guards at their St. Patrick’s Day Parade in Aldershot, England. For that occasion, she donned a belted, moss green coat dress by the London designer Emilia Wickstead, a brown Lock & Co. hat and a gold shamrock Cartier brooch, a royal heirloom that had been worn by Queen Elizabeth, the Queen Mother.