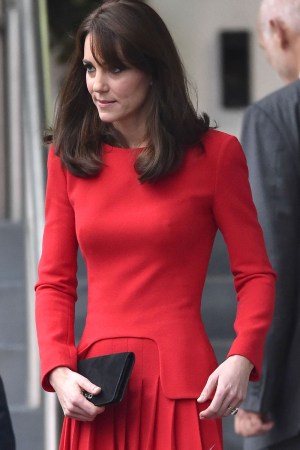 She wore a festive red Alexander McQueen dress, which she was previously seen in during the Thames Diamond Jubilee Pageant in 2012.

The duchess has made a number of visits during the past two weeks as part of her charity work. She attended  ICAP’s annual charity day with Prince William last Tuesday. She also paid a visit to the Centre of Addiction Treatment Studies, taking part in a tutorial discussing the training provided by the organization last Thursday.

During her visit at the Anna Freud Centre, the duchess joined the children and their parents as they created Christmas collages to reflect on the year that passed and the progress they have made. She then watched a musical performance where the children showed off the skills they have been learning during drumming workshops organized by the institution throughout the year.

Kensington Palace released a short clip on its Twitter feed which shows the duchess joining the staff, the children and their parents during the drumming performance.