The Duchess braved the cold in Oxford to show her support for The Art Room, a charity of which she is a patron. 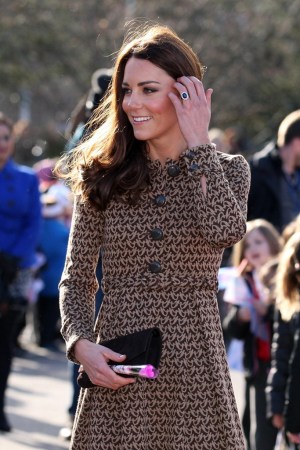 The Duchess of Cambridge stayed far away from the fashion flock and braved the cold in Oxford, England, Tuesday morning to show her support for the Art Room, of which she is a patron. The organization maintains art studios in more than 20 schools throughout Britain and helps children with behavioral problems by encouraging them to paint and draw.

The duchess wore a brown shirtdress with a dove motif by Orla Kiely. The dress originally retailed at 325 pounds, or $514 at current exchange, but is now on sale at 162.50 pounds, or $257.

On arrival at Rose Hill Primary School, she was greeted by crowds of cheering children and presented with a bouquet of cream roses, an apron reading “Miss Catherine” and pet treats for her new cocker spaniel puppy. Later, she looked on as eight children painted “The Owl and the Pussycat” poem onto canvas.