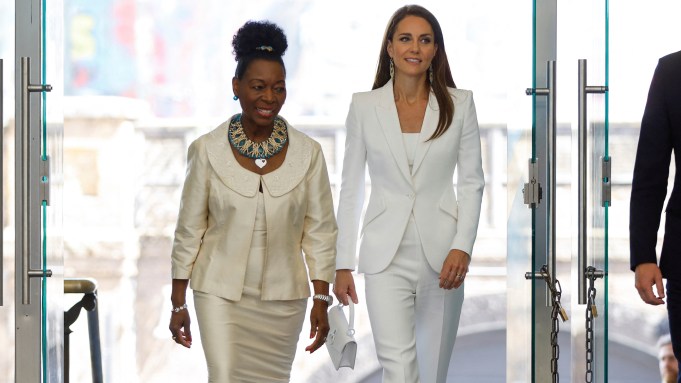 LONDON — The Duchess of Cambridge is wearing white for the summer.

Kate Middleton re-wore her crisp white suit from Alexander McQueen on a visit to London’s biggest rail station, Waterloo, with her husband Prince William for the unveiling of the National Windrush Monument.

Middleton made her first public appearance wearing the suit earlier this year to meet the Jamaican Prime Minister Andrew Holness.

The clean-cut suit that retails for 2,000 pounds is a respectful nod to Windrush Day, which falls on Wednesday. It was introduced in June 2018 on the 70th anniversary of the Windrush migration.

A white two-piece is synonymous with Bianca Jagger’s Yves Saint Laurent wedding suit that she wore to her 1971 wedding to rock star Mick. It has since evolved into a powerful armor donned by the likes of Hillary Clinton, who wore her Ralph Lauren number at the final presidential debate, or when Tina Turner wore a white YSL suit on the day she left her husband, Ike.

The white suit is a favorite among royal women. The Duchess of Sussex sported a white double-breasted blazer with matching trousers from Valentino to the Invictus Games 2022. It was the week that saw her come back into the spotlight with a star-studded wardrobe from the Italian luxury brand and Celine.

In the past, Middleton has opted for her treasured ivory hued blazers from Roland Mouret and Zara that she’s worn on a royal tour to Canada in 2016 and to the Docklands Sailing and Watersports Centre in 2017.

Since turning 40 in January, the duchess has upped the ante when it comes to her public image. She’s become more conscious of the labels she’s wearing and where her support is directed toward — right now it’s at British brands only as she confidently demonstrated over the Jubilee weekend in Emilia Wickstead and Stella McCartney.

The “Kate Effect” has proved successful whether in couture or high street. And for once, she’s allowed to join in on the fun to be on trend. For spring 2022, the white suit was ubiquitous as seen on the runways of Fendi, Tommy Hilfiger and Altuzarra.