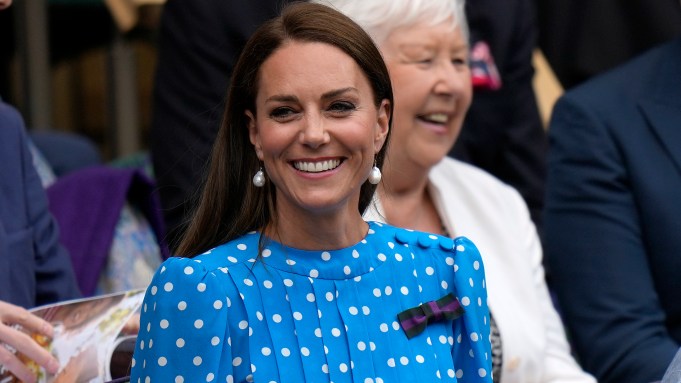 LONDON — The Duchess of Cambridge has made her first appearance at this year’s Wimbledon tennis championships.

Middleton’s first public appearance in the dress was in June during the four-day Jubilee weekend celebrations when she surprised locals by attending a street party in Kensington, London.

The dress has been modified for the duchess to make it more demure by removing the crystal embellishments on the belt and buttons.

The extra detail on Tuesday was the dark green and purple ribbon bow pinned to her dress — a badge that female members of the All England Tennis Club wear, of which the duchess is a patron.

Alessandra Rich has become Middleton’s summer go-to designer. She chose another polka-dot number from the British designer for this year’s Royal Ascot that resembled the black-and-white polka-dot dress Princess Diana wore to the 1988 Royal Ascot races.

The duchess was recently commissioned by Camilla, Duchess of Cornwall to photograph her for the cover of Country Life at her home in Wiltshire, Raymill.

On the day of the cover reveal, Middleton tactically used her sartorial choices to send a clear message — that she respects both Camilla and her late mother-in-law, Diana, Princess of Wales.

Middleton’s Alessandra Rich dress bears a strong resemblance to Diana’s blue-and-white polka-dot dress designed by Catherine Walker that she rewore twice — once to accompany Queen Elizabeth II at Victoria Station to welcome German President Richard von Weizsacker in 1986 and the other in 1989 on the royal tour of the Gulf with Prince Charles to meet with the Emir of Kuwait, Jaber Al-Ahmad Al-Sabah.

Polka dots are a sentimental print for Middleton and are often how she pays tribute to Diana.

The signs are all in the polka dots — you just have to connect them.