Tour of jet-engine plant is part of Asian tour. 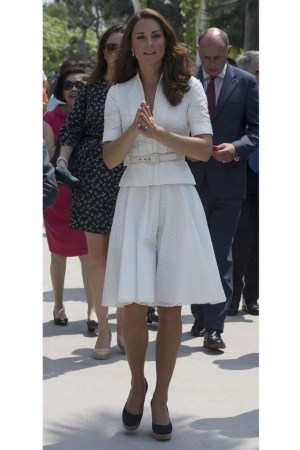 ISLAND LIFE: Alexander McQueen needlework and jet engines don’t make an obvious pairing, but the Duchess of Cambridge had different ideas during a guided tour of a state-of-the-art Rolls-Royce factory in Singapore Wednesday. The duchess wore a cream McQueen broderie anglaise skirt suit for a tour of the plant on the second day of the royals’ official visit to the Far East and the South Pacific.

Two hours and one outfit change later, she visited Queenstown wearing a skirt and top by the Singapore-based label Raoul. Douglas and Odile Benjamin, the cocreative directors and chief executive officers of Raoul, said: “We have received endless messages from Singaporeans conveying their pride that the duchess wore a Singapore brand. It is a great honor for us to be recognized by her.”

Later, for an evening reception at the British High Commissioner’s residence in Singapore, the duchess wore a printed silk Erdem dress.