Double Duty for the Duke and Duchess of Cambridge

Thursday marked an event-packed day for the royal couple, who turned up at events at The Goldsmiths’ Hall and London’s Imperial War Museum. 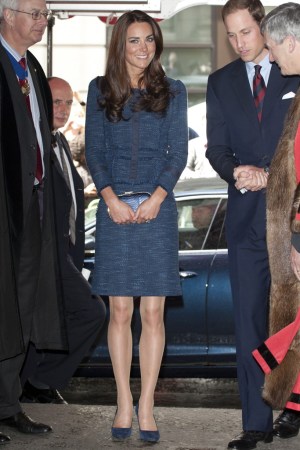 CAMBRIDGES, DAY TWO: Thursday marked an event-packed day for the Duke and Duchess of Cambridge. After attending a reception at The Goldsmiths’ Hall in London’s financial district in the afternoon, in the evening the royal couple visited London’s Imperial War Museum. The duo were there to launch a fund-raising campaign to create new First World War galleries at the museum by 2014, to mark the war’s centenary.

RELATED STORY: William and Kate on the Red Carpet >>

After wearing a Rebecca Taylor tweed skirt suit to the afternoon event, Kate switched to a gray Amanda Wakeley shift dress for the evening event.

Earlier at The Goldsmiths’ Hall, the duke and duchess had met two British army teams who recently completed a race to the South Pole. The expedition, of which William is also patron, raised funds for the Royal British Legion’s Battle Back Centre, which helps wounded, injured and sick members of the armed forces.

The duo have more low-key plans ahead for their first wedding anniversary on Sunday. A spokesman for St. James’ Palace told the Press Association that the couple will “spend the weekend with friends.”